It was just the financial boost that many persons needed when Digicel held its very first Christmas countdown promotion.

From December 16 – 24, 8 customers walked away with Bds$2,000 daily, while on Christmas Eve one lucky person took home the ultimate prize of $5,000 on the final day of the promotion. 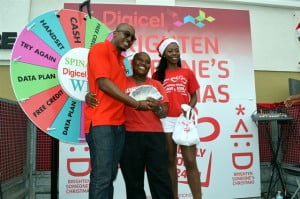 Car wash operator, Farrah (centre), was the grand finale of $5,000 in cash, which she won on Christmas Eve at the new Digicel Head office in Warrens, St. Michael.

At 9 locations across the island, customers were invited to top-up with $6 or more and be automatically entered for a chance to Spin the Digicel wheel for on the spot prizes of handsets, credit, data plans and of course the daily grand prize of $2,000.

Commercial Director of Digicel (Barbados) Limited, Alex Tasker, said the promotion was devised to generate excitement among customers in addition to giving back to them.

“Over the 9 days we were able to get up close and personal with our valued customers, engaging them and brightening their day with lots of giveaways. Through visiting areas like Speightstown, Oistins, Six Roads, Black Rock, among others, we were able to get right into the heart of where our customers are, which is very important to us at Digicel.”

As Digicel enters its 10th year of operation in Barbados, customers can look out for other extraordinary promotions, as the telecommunications company continues to deliver on its promise of bringing them extraordinary experiences.