A serious accident involving an motor omnibus owned by the Transport Board, occurred on Saturday 28 December 2013, at Harrisons, St. Lucy, about 7:20 am.

Investigations into this accident are continuing. Walter Henderson Lewis, 45 years old, was the driver of the omnibus, when he apparently lost control and the omnibus slid into a canefield and overturned on its right side. 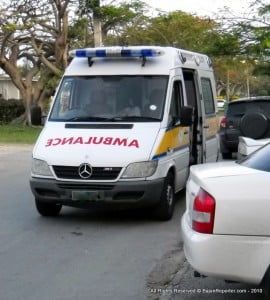 (PERSONAL FILE IMAGE) It is believed that Tesha Norville, 32 years of Northtumberland, St. Lucy, sustained a fractured right foot. She was taken to the QEH by ambulance. The other nine (9) of the ten (10) passengers were reported to have sustained minor injuries.

Medical assessments of the passengers were conducted at the scene by Doctor David Byer of the QEH. The remaining 9 persons were transported for further medical attention to the QEH and to a polyclinic by a Transport Board Omnibus. The QEH and the BDF Ambulances along with personnel from the Barbados Fire Service and the Roving Response Team responded to the scene.