The Salvation Army has received yet another welcome boost from CIBC FirstCaribbean International Bank which will enable the charity to finance its programmes to help the less fortunate, not just at Christmas but throughout the year.

In a recent presentation the Salvation Army received a cash donation from the bank, represented by Michelle Whitelaw, Director of Retail Banking, Barbados. The funds will go towards financing the army’s feeding programme, thrift store, hampers which are distributed throughout the year, as well as meeting other needs.

Divisional Secretary, Captain Robert Pyle said the bank’s contribution would have a “tremendous impact“. “We’re very grateful that the bank has come to the assistance of the less fortunate through the Salvation Army. The funds will go right back out to the community. It’s only through donations that we can have these programmes and this contribution will go a long way in helping,” Captain Pyle explained.

He added that the Salvation Army had seen an increase in the number of persons coming to it for assistance, both male and female. In August 2013, for example, nearly 2,000 persons were fed at its facilities while the Meals on Wheels programme delivered meals to just over 500 persons in St. Michael, Christ Church, St. Thomas, and St. George. Furthermore, each month approximately 100 hampers are distributed.

With regard to the response to its Christmas Appeal, Captain Pyle said that despite the challenges in the economy, Barbadians were still giving. “We applaud them for their faith and trust in our organisation. We thank Barbados, Corporate Barbados and CIBC FirstCaribbean for their generosity and love for the less fortunate in the community. They are not giving to the Salvation Army per se; the end result of giving to us is helping the less fortunate. The bank needs to be commended in giving back to the community. We thank them for having that faith and trust in us that we’ll do justice with their contribution.” 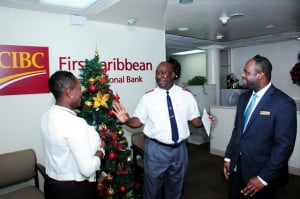 The bank has assisted the Salvation Army several times over the years including a major donation last Christmas. Whitelaw said: “We’re happy to continue our relationship with the Salvation Army because of the quality, depth and impact of what they do. Giving back to Barbadian communities, especially those in need, is always fulfilling and will continue to be an integral part of who we are and what we do“.