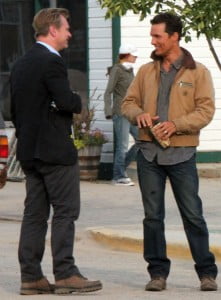 {IMAGE VIA – comicbookresources.com} In the future, governments and economies across the globe have collapsed, food is scarce, NASA is no more, and the 20th Century is to blame. A mysterious rip in space-time opens and it’s up to whatever is left of NASA to explore and offer up hope for mankind.

Mainly based on the scientific theories and script treatment of renowned theoretical physicist, Kip Thorne. Interstellar is set to be released in late 2014