HBO will premiere the first of the new series’ eight one-hour episodes on January 12th. This season centers on Martin Hart (Woody Harrelson) and “Rust” Cohle (Matthew McConaughey), two detectives and former partners who worked in Louisiana’s Criminal Investigation Division during the mid-1990s. In 2012, for reasons not immediately known, both detectives are interviewed separately by investigators about their most notorious case: the gruesome murder of a prostitute by a possible serial killer. 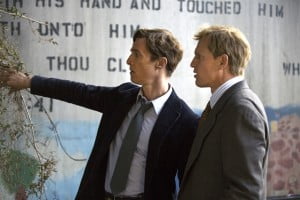 During the review of the case, Hart and Cohle’s personal backstories and often-tense relationship overlap and converge as a major focal point. Hart, an outgoing Louisiana native, is a family man whose marriage is wavering under the pressures and distractions of his work; meanwhile, Cohle is a solitary, pessimistic ex-narcotics detective from Texas.

As the plot is moved forward by their shared obsession to find the serial killer, the real drama centers around the relationship and personalities of the pair and how they mutually impact one another as detectives, as friends and men. Written/created by Nic Pizzolatto and directed by Cary Fukunaga, True Detective is executive produced by both Pizzolatto and Fukunaga, as well as by Steve Golin, Scott Stephens and Richard Brown. 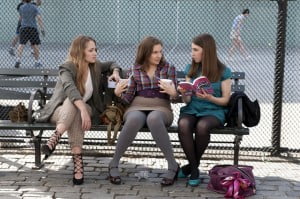 Immediately following the premiere of True Detective on January 12th, the acclaimed original series Girls returns for its third season with two new episodes. Created by and starring Lena Dunham, this Emmy® and Golden Globe® winner humorously portrays the misadventures and small triumphs of a group of young adult friends living in New York City.

The third season of Girls focuses on Hannah Horvath (Dunham) and her anxiety, insecurity and uncertainty as she approaches her mid-20s. Hannah is now in a committed relationship with Adam (Adam Driver), and they are currently settling into a newfound domesticity living together in Hannah’s apartment. Hannah is also working at rebuilding her writing career and is trying to focus on delivering her eBook to her eccentric editor. This season will also cover developments in the lives of suddenly jilted Marnie (Allison Williams), rehab-ridden Jessa (Jemima Kirke), newly single Shoshanna (Zosia Mamet) and now established entrepreneur Ray (Alex Karpovsky). Girls is executive produced by Dunham, Judd Apatow, Jenni Konner and Ilene S. Landress, while Bruce Eric Kaplan serves as production consultant.

In the new unfiltered comedy Looking, which premieres the week after True Detective and Girls on January 19th, three friends in San Francisco explore the fun and sometimes overwhelming options available to a new generation of gay men. Friendship unites the trio although each is at a remarkably different stage in his life: Patrick (Jonathan Groff) is a 29-year-old video game developer who is returning to bachelorhood in the wake of his ex’s engagement; aspiring artist Agustín (Frankie J. Alvarez),31, and questioning the idea of monogamy in the middle of a move to live with his boyfriend; and Dom (Murray Bartlett), the oldest of the group, is a longtime waiter who, at age 39, is struggling with middle-age as he confronts unfulfilled romantic and professional dreams.

The stories of these three men intertwine and unwind in their search for happiness and intimacy in an era of unparalleled choices – and rights – for gay men. Rounding out the Looking world are Dom’s roommate Doris (Lauren Weedman), Agustín’s boyfriend Frank (O.T. Fagbenle), and Patrick’s co-worker Owen (Andrew Law), as well as love interests Kevin (Russell Tovey), Lynn (Scott Bakula), and Richie (Raúl Castillo).