Caribbean literature will be in the local spotlight when poet and critic Margaret D. Gill launches, Rich Man in His Castle, Poor Ones Take the Street: Integrating the ‘Canonical’ Text & Popular Culture at the 3Ws Pavilion of the Cave Hill Campus on Tuesday 17 December at 6:30 pm. 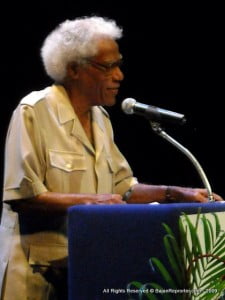 This critical work on the Caribbean classic, In the Castle of My Skin, is being launched in commemoration of the 60th anniversary of George Lamming’s landmark publication of his first novel.

Rich Man in His Castle, Poor Ones Take the Street includes an interview by the author with George Lamming “where he reflects on many things about the novel and about Caribbean society in general,” Gill notes.

Margaret Gill is described by Kamau Brathwaite as “one of the very finest poets in the Caribbean – and not only in English. Brilliant (and therefore important); a literary critic as any (of too few) writing out of the Caribbean today.” She is currently pursuing a PhD in Literatures in English.

The event is open to the general public.