Montserratian Minister of Education Colin Riley said he’ll be pursuing the possibility of a creating a 21st Century school now that steps need to be taken to rid the Montserrat Secondary School of materials thought to contain asbestos.

Students were asked to stay home on Monday and Tuesday while officials decided on the best course of action for housing the more than 300 students and teachers of the secondary school in Salem.

Following an independent consultant’s group findings of material which may contain asbestos, the decision was taken to close the school and find alternative accommodations. Technicians from the Project Implementation Unit (PIU), the Environmental Health department have conducted independent investigations, both of which found “lagging” material in the roof and walls which are thought to be made from asbestos products.

PIU head Owen Lewis said the materials were discovered while a consultant team was making structural evaluations on the school campus to ascertain the life of the buildings and recommend a phased approach to upgrading them.

Minister Riley said they had been under the impression that when the school’s roofs were changed in the 1990s that all of the asbestos material had been taken care of. He acknowledged that it was a serious but inherited problem which the government is working on collectively with teachers and other ministry officials to find the best possible outcome for the students and Montserrat.

This emergency, he noted, is providing the impetus to pursue more speedily the creation of a state-of -the-art secondary school for Montserrat. “Salem is the preferred location for the school in the future and we want to work with all of our partners including the Ministry of Finance, DFID, the teachers, students and parents to create a school which we all can be proud of,” Minister Riley said.

The education minister said the vision includes the creation of a campus which can house up to 750 students and provide for all of the modern functions of a learning environment, including the performing arts and sports. 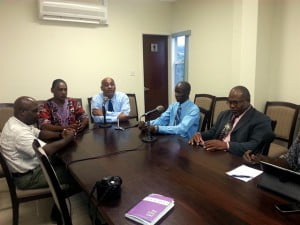 He noted that this negative circumstance has created the opportunity to advance the plans for building a new secondary school.

The minister acknowledged the support of the planning team which includes Permanent Secretary of Education Phillip Chambers, Director of Education Glenn Francis, PIU Director Owen Lewis, and the principals of all three public schools.

“We do not know the exact timeline for MSS to return to Salem. In the initial phase we will operate a complete school from Monday, November 11 at the Brades Primary School campus. As it relates to returning to Salem, after some work is done it will be possible to reoccupy the buildings which were not affected. We will also refurbish the Salem Primary School compound including the 1920 building and the ones built in the 90s. In the second phase, we will have enough space and functional capability to take the school back to that community,” the minister stated confidently. “We do ask people to be patient. The quality of the education will not be any less and we want to keep safety at the forefront.”

Starting this Wednesday, fifth formers are asked to return to classes at the Salem Primary School until Friday. From next week Monday, classes will resume for all secondary school students at the Brades Primary School. Students from Brades Primary will attend classes at the Lookout Primary on a shift basis until November 18 when the buildings now under repairs will be completed and handed over. At that time, both primary schools will operate concurrently.