For years nationals of the 15 nation Caribbean Community (CARICOM) have complained of the discrimination they’ve experienced at the border controls of each other’s countries. This discrimination has ranged in many cases from extensive questioning before being allowed entry for a limited period, to arbitrary refusal of entry and immediate expulsion.

This unpleasant treatment has galled CARICOM nationals causing them to question the benefits of being part of the organisation which was set up by Treaty and which stipulates the obligations of its member states with regard to the freedom of movement of their citizens.

On October 3, in a landmark decision, the Caribbean Court of Justice (CCJ) brought at least a legal end to discrimination and denial of right of entry to Caribbean Community nationals. If such practices continue in member countries of the Community they will be unlawful, and affected persons can seek redress from the CCJ.

According to the CCJ decision, nationals of the Caribbean Community are legally entitled to enter and stay in each other’s countries for up to six months without restriction, unless deemed as an undesirable person. Border officials also cannot arbitrarily deem a CARICOM national as “undesirable“. 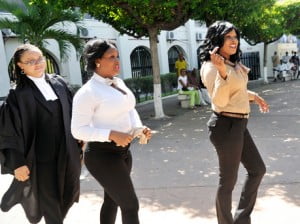 {IMAGE VIA – jamaica-gleaner.com} What everyone has failed to ask, is the name of the Bajan man Myrie (EXTREME RIGHT) was here to seek employment with, and why did he not come forward to defend Myrie? What skeletons would have leapt from the closet? Is this a question to remain unanswered?

The CCJ is not yet the final appellate Court for civil and criminal matters for all CARICOM countries, but it is not in that form that the Court made its watershed judgement. The decision was issued by the CCJ as the Court of original jurisdiction in relation to the CARICOM Treaty. In that form, its decisions are binding on the Community member countries and they cannot be appealed.

The occasion for the CCJ’s judgement was a complaint brought by a Jamaican national, Shanique Myrie, against the government of Barbados. Myrie claimed that in March 2011 the border authorities in Barbados violated her right to free movement under the CARICOM Treaty when she sought to enter the country. She further claimed that she was illegally detained and deported and her human rights were violated when she was subjected to a “cavity search” described as a “finger rape“.

But while the case gave redress to Myrie for her grievances, it was far more significant for its establishment of the rights of the people of CARICOM and for eliminating misconceptions of the supremacy of “national sovereignty” over “Community Law” under the Revised Treaty of Chaguaramas – the CARICOM Treaty.

On this matter, the CCJ was guided by the 28th Meeting of CARICOM Heads of Government in 2007 at which they agreed that “all CARICOM nationals should be entitled to an automatic stay of six months upon arrival in order to enhance their sense that they belong to, and can move in, the Caribbean community, subject to the rights of Member States to refuse undesirable persons entry and to prevent persons from becoming a charge on public funds“.

In arriving at their judgement, therefore, the CCJ did nothing more than give judicial acknowledgement and authority to a decision by CARICOM Heads of Government – the supreme decision making body of Community law.

The Court also clarified the matters of “undesirable persons” and persons who might become “a charge on public funds“. Up until now, both these categories of persons have been determined by border authorities based on individual country guidelines that, for years, CARICOM nationals have publicly argued discriminates against them and makes a mockery of the CARICOM Treaty.

The Court has now ruled that for a CARICOM national to be validly excluded on the basis that he or she poses a realistic threat to engage in conduct prohibited by national law, “the receiving state must show that its own nationals who engage in such conduct are routinely prosecuted or otherwise subjected to some legal sanction“.

Further the Court has ruled that no CARICOM national can be refused entry by border officials without being informed “promptly and in writing not only of the reasons for the refusal but also of his or her right to challenge that decision“. CARICOM countries are also now required to provide “effective and accessible appeal or review procedures with adequate safeguards to protect the rights of the person denied entry“.

While all of this will bring relief to all CARICOM nationals and represents a triumph for the Caribbean people in their often expressed desire to travel in the region “hassle free“, the CCJ judgement does two other very important things. First, it establishes that being a member of CARICOM does give enforceable legal rights to every Caribbean national in relation to entry to CARICOM countries for a period of up to six months. In this sense, it is an occasion for real celebration of Caribbean regionalism at the level of people – it is a rare occasion, but it will help to lift the worth and meaning of CARICOM. Second, it has established that there is CARICOM Community law – devised and agreed by CARICOM Heads of Government as the principals that the Community’s peoples have elected to represent them – and that such Community law cannot be invalidated by the failure on any country to incorporate those decisions in their municipal laws.

The immigration and law enforcement departments of all Community countries should now be ensuring that the regulations and instructions given to their border officials reflect CARICOM Community law and the decision of the court.

With regard to the CCJ, the objective, impartial and learned judgement it has given should now cause all doubters to welcome and embrace it as the region’s final court of appeal in all matters. In the case of Jamaica that argued to stay with the British Privy Council as its Court of final appeal on the basis that Jamaicans could not expect justice from a Caribbean court, Shanique Myrie stands as the symbol of that deeply flawed position.