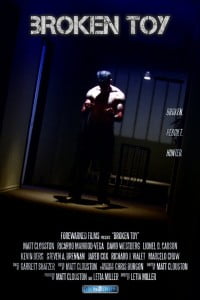 {IMAGE VIA – thevro.com} Made by three fanboys and one fangirl, BROKEN TOY is a funny, high-energy feature length film released episodically in 5-7 minute episodes. And with only $100 per episode (spent mostly on pizza) and nooooooo experience with visual effects, what you see on the screen was entirely self-taught with the aid of lots and lots of tutorials and lots and lots of coffee. We run no ads. We have no sponsors. We aren’t asking for money. This is just some passionate filmmakers using what they have to create something fun for fans of the scifi superhero genre.

Astounding progress has been made by the United States government in the development of the once-theoretical Mach 24 jet engine.

Fast jets, however, need fast pilots and a program to re-engineer aviators with accelerated reflexes and neural pathways capable of flying these fighters has been a disaster.

A fifth, Quinn – never meant as anything more than a disposable test subject – has unexpectedly survived the strain to his nervous system.

Hunted and confused, Quinn is now a violent fugitive on the run from his grave. Drugged, hunted, and slightly silly in a murderous way, he’s on the move.