Fashion Designer Mel Simon is driven by a love of fashion and well constructed clothes. This season Mel presented a showcase of gowns that are inspired by menswear.

The Genesis Collection is a whimsical fashion gender-bender that transforms the masculine elegance of The Great Gatsby era into the feminine flair of today’s street-smart fashionista.

Mel Simon‘s beginnings started with an apprenticeship with a local tailor in his homeland of Trinidad. After graduating high school, Simon set an ambitious goal to learn the fundamentals of garment creation before traveling to the United States. It didn’t take long for Simon to enroll at the Fashion Institute of Technology (FIT), majoring in pattern making. 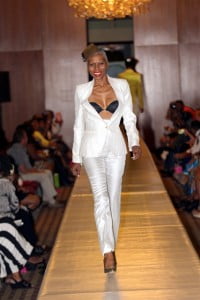 Brooklyn Clothing Lab street-wear is a fashion line with an eclectic mix of bold colors and dramatic cuts that’s inspired by the spirit of B’klyn, NY.

Simon manifests his own creations from concept and design to production and delivery. He is a salient designer delivering refreshing fashions that make it easy to be glamorous.

Simon’s latest endeavor re-conceives the interplay of textiles, prints, and shapes …leading to the creation of the Brooklyn Clothing Lab. Simon remains focused on his goal to become a prominent Fashion Designer in his own right.