In Kaj Designs‘ latest philanthropic venture, the Tobago brand, has donated two signature garments for auction at the celebrity charity event, Legends Beyond, which takes place this Thursday September 19, 2013 in Los Angeles. 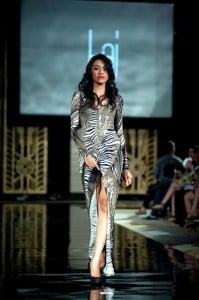 Legends Beyond promises to attract an elite crowd of A-list celebrities with host, Vivica A. Fox, and confirmed guests including Charlie Sheen, Jane Seymour and Nicole Kidman. For the highly anticipated silent auction, Kaj has contributed two items, its silk kaftan and maxi dress with ring accent, from the latest Kaj Resort 13/14 collection, Tribu Sauvage. 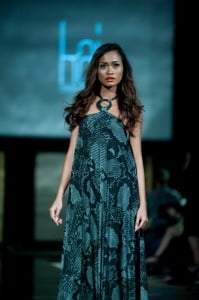 Kaj’s first auction item at upcoming celebrity charity event, Legends Beyond: The maxi dress with wooden ring accent flows in a spiral flare of comfort that embraces the body in a bold animal print.

Most recently, these favoured pieces graced the runway at the inaugural Fashion Festival Bali (TFFB) in yet another daring move by the fashion house to forge ahead in infiltrating South Asian markets. On August 31, 2013, in the closing show presented by Indonesia TATLER, Kaj brought its signature flair to the TFFB runway. The haunting melodies of Wayne Planchart’s narrative musical composition, Sands of Time, offered a milieu of Afro and Indo undertones that befit the simple luxury of Kaj’s creations of bold tribal infusions set against a backdrop of wild animal and camouflage prints.

“I thought the Kaj Designs collection was an inspiration to The Fashion Festival Bali 2013 and a true reflection of the creative diversity of the world’s most exciting fashion,” shared Nicholas Meimaris, Editor-in-Chief at Poster Magazine and Managing and Creative Director of MGROUP, TFFB’s producer.

The high profile, 7-day event took place from August 24 to 31, 2013 at the lavish Stones Hotel in Bali’s Legian region. Set against the breath-taking backdrop of one of the world’s leading tourist destinations, TFFB attracted an exclusive audience of media, fashion professionals, fashion enthusiasts, leisure travellers and Asian Pacific celebrities and socialites including Michael and Lindy Klim and Casey Burgess. 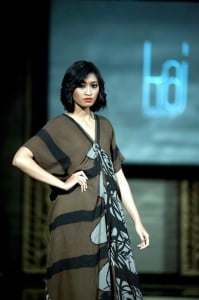 Kaj’s second auction item at upcoming celebrity charity event, Legends Beyond: The kaftan wraps the body in luxurious folds of silk that subtly reveal bare skin by the poolside or at a sunset cocktail.

The fashion shows, which featured presentations by emerging and established designers from Australia, Bali, Jakarta and Singapore, were supported by workshops; designer hosted lunches and dinners; live entertainment; after parties; and a showroom retailing the collections of participating designers. With partners including Indonesia TATLER; Harper’s Bazaar Indonesia; Esquire Indonesia; Grazia Indonesia; Air Bali; Belvedere Vodka; and Moet & Chadon, TFFB was one of Bali’s most glamorous events.

With Kaj’s new focus to lead as a socially responsible fashion brand coupled with its recent successes in leading the Caribbean at Manhattan’s Intermezzo Collections, Singapore’s BLUEPRINT and Bali’s TFFB, Tobago’s premier brand is fast establishing itself as a pioneer in Caribbean fashion ushering in fresh life and creativity to the sector as it shines a light on Trinidad and Tobago.