Breitling celebrates the 50th anniversary of the world’s fastest motorsport

A specialist of pilot’s watches and a privileged partner of aviation, Breitling is the main sponsor of the famous Reno Air Races, one of the biggest aeronautical events on the planet. The brand also offers the general public a free game for mobile platforms providing a chance to experience all the sensations of high-speed racing on a smartphone or tablet. Thrills guaranteed!

Created in 1964, the Reno Air Races are celebrating in 2013 half a century of performance, excitement and breathtaking sights. Each year, in September, hundreds of thousands of spectators converge on the Nevada desert to admire the famous “pylon” races in which planes are flown just a few feet off the ground at speeds of more than 500 mph. 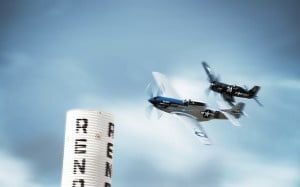 As the main sponsor of the event, Breitling actively supports this combination of daring and precision, freedom and control that takes aviation to the frontiers of possibility.

To enable the many enthusiasts of fast-paced feats to experience the excitement of the Reno races, Breitling also offers an incredible online air racing game available for free download on iOS (iPhone, iPod touch, iPad) and Android – and optimized for all the latest versions of these platforms.

By taking the controls of the (entirely customizable) plane of their choice, participants can all discover – whether in a multiplayer race or a solo challenge – the extraordinary experience of piloting a plane at Reno while following the famous motto Fly low, fly fast, turn left. Featuring stunning full 3D graphics, the Breitling Reno Air Races game provides a lifelike reconstitution of the formidable pylon races and an authentic immersion into this extreme world with its vivid colors, roaring engines, fierce competition and pulsating performances.

The 50th edition of the Reno Air Races, scheduled from September 11th to 15th 2013, will once again draw the world’s elite pilots including Breitling friend Thom Richard, in his legendary Precious Metal. The event will also feature a spectacular flight by Yves “Jetman” Rossy, the world’s first jet-powered man and another eminent member of the Breitling fleet.