Commissioner of Police, Darwin Dottin is no longer the head of the Royal Barbados Police Force.

It’s being seen as the latest salvo in the contentious relationship the commissioner has had with the PSC.

The Commission said in its correspondence to Mr. Dottin that he is being retired in the public interest. 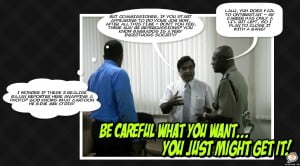 (TEXT VIA CBC-TV8) It was only last week, news emerged that the PSC had taken the unusual step of leaving Commissioner Dottin out of discussions to select a deputy commissioner. {CLICK FOR BIGGER}

When contacted PSC chairman Guyson Mayers said members of the commission had agreed not to discuss its business in the public and as such he would not comment on the matter.

Meantime, opposition leader Mia Mottley has described the action as unprecedented, adding that it shows another aspect of a type of leadership in Barbados to which the island is not accustomed.

And opposition shadow attorney general, Dale Marshall has questioned the grounds on which the decision was taken, given that the recommendation was based on Mr. Dottin’s age and not any evidence of dereliction or failure to perform his duties under the Police Act.

Mr. Marshall says his message to the political directorate is simple, leave the running of the police force to the commissioner and his officers.

Commissioner Dottin has led the force since 2004

Assistant commissioner, Tyrone Griffith is to act as interim boss of the police force.