Pedro Jordan, James Norris, Anderson Barker and Romel Stuart had 310 reasons to smile this week after they were announced as winners in Mount Gay Rum’s 310 Sweepstakes promotion, an ongoing celebration that commemorates the 310th anniversary of the world’s oldest rum. 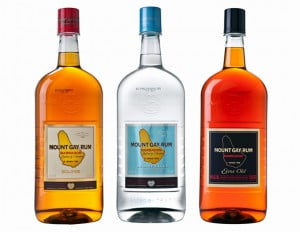 The lucky winners were on hand at the Mount Gay Rum Visitors Centre earlier this week where they collected their prizes from Andrew Straughn, activation coordinator for Mount Gay Rum, and Shakida Grant, marketing executive with Digicel.

“Very few companies are able to reach a milestone such as this, so this promotion is really a reward for those consumers who have been loyal to Mount Gay Rum over the years,” said Straughn, noting that several customers had already been awarded during the national sweepstake.

“Our continued success over the past three centuries has been firmly rooted in an ethos of refinement, dedication, excellence and teamwork. We are a proud of what the brand has achieved and we are equally satisfied with what the brand stands for today. It continues to distinguish itself around the globe and this is a direct result of the company’s foresight and dedication towards the production of one of the world’s finest rums.” 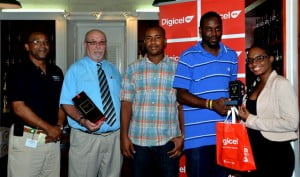 The winners echoed Straughn’s sentiments and offered their opinion about what they collectively termed was their “drink of choice“.

“Extra Old is my undisputed favourite,” said Jordan, who was speaking on behalf of the group. “I can drink it straight or with a mixer, it doesn’t matter to me. Once its Mount Gay, it will be in my glass.”

Digicel’s Shakida Grant said the telecommunications company was pleased to present the market-leading Samsung Gallaxy SIII as a weekly prize for the ongoing competition.

“The SIII has been touted as a technical triumph, so we are thrilled to be able to offer it as a prize for this competition,” she said.

Prizes are awarded on a weekly and monthly basis, and persons can enter as many times as they like, with all entries going forward to the final draw at the end of July for the chance to win a fully-loaded 2013 Hyundai Tuscon SUV valued at more than $100,000, compliments Courtesy Garage.