Personnel from the St. Kitts-Nevis Defence Force (SKNDF) and the Royal St. Christopher and Nevis Police Force are exchanging infantry best practices with members of the Florida National Guard (FLNG), during a five-day workshop.

Major Andrew Mueller of the FLNG is heading up the six man visiting group from the 53rd Infantry Brigade Combat Team. He outlined the goal of the April 15-19 training to the 18 soldiers and seven police officers in attendance.

“These guys are going to be facilitating the exchange and leading it, but it’s still a shared subject matter expert exchange event,” Major Mueller explained. “Some of the things you’re going to be learning this week and that we’ll also be learning from you, are infantry mission fundamentals such as setting a traffic control point, [security patrols], how to produce orders … and things of that nature.” 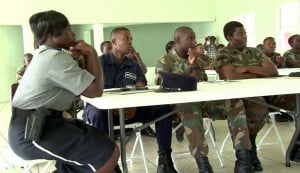 Participants at the start of the infantry exchange programme

Captain Walter Bass of the SKNDF revealed that a similar exchange was held in March this year but the course design was for a specific unit.

“What we looked at was the responsibilities of the military police, in terms of setting up traffic stops and searching for contraband …” he stated. “So it was just establishing proper safety procedures [that will] help the military police conduct themselves in a professional manner ….” 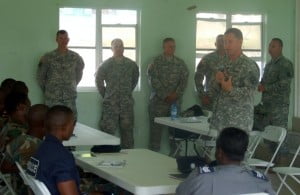 Captain Bass added that it’s important to include the police in such activities given the close relationship between the local security forces.

“In any event, where there is an operation and [the police] asks [the SKNDF] for assistance, we need to be certified so that our soldiers can operate on the same guidelines and procedures [that] the police operate under,” he disclosed. “So when we have training, we also bring them along so that they can learn of our procedures when we are on joint operations.”

The exchange used both classroom discussion and hands-on application of the material. The sessions concluded at the Police Training Complex.