A donation of over 100 comic books and graphic novels to the Barbados National Library Service has helped boost that institution’s small but very popular collection of graphic novels.

The donation was made possible though two online communities and the efforts of one UWI Cave Hill campus student Rashid Holder. Holder is a member of the massively popular global forum Reddit. “There is a subreddit (sub-forum) where you can ask for book donations,” he explains “I asked for comic books specifically the Barbados National Library Service. Another Reddit user (who prefers to go by his online name AskmeAskme) replied. He brought them with him to Barbados to give to me for the donation.”

A selection of over 100 comic books and graphic novels donated to Barbados’ National Library service by Reddit member “AskmeAskme” and the Outsiders Underground Comicbook group Wade Alleyne and Rashid Holder.

Holder specifically asked for comic books because he is a member of a Barbados-based online community of comic book creators and readers “The Outsiders Comicbook Underground;”

Wade Alleyne, founder of the Outsiders, Facebook group made the official presentation of the books with Holder. “Our group aims to foster an appreciation of comic books and graphic novels. Comic book may have once been considered juvenile to some, but there is a lot of research to show that teachers are finding it easier to teach writing, grammar and punctuation with material that students are fully invested in, such as comic books. The pairing of visual and written plotlines in comics are especially helpful to struggling readers and to young boys who have an affinity for superhero comics. However, that doesn’t mean they are easy reading. There are often difficult words and complex themes in superhero comics that help teenagers enhance their vocabulary and interests in literature, physics and visual art.” 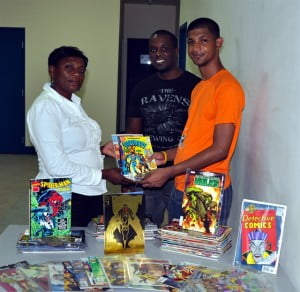 (from left to right) Loleta Parris Librarian with the National Library Service main branch accepts the donation of over 100 books from members of the Outsiders Underground Comicbook group Wade Alleyne and Rashid Holder.

Loleta Parris, staff Librarian who accepted the donation on behalf of National Library Service Director Annette Smith echoed Alleyne noting that children and teenage boys borrow the comic books from the Library constantly. “The National Library Service is grateful for this donation, have a small but very popular collection of comic books, which is enjoyed by both children and teenagers at different branches of the library. This addition to our collection will definitely have many readers.”