The Inter-American Development Bank (IDB) signed a US$20 million for a Global Loan Program with the Caribbean Development Bank (CDB) for projects in the four IDA-eligible Organization of Eastern Caribbean States (OECS) member countries. This loan was approved yesterday by the CDB’s board.

The CDB will on-lend the funds for the financing of public sector projects in Dominica, Grenada, St. Lucia and St. Vincent and the Grenadines. These small open economies are vulnerable to external economic shocks and natural disasters. They are also still reeling from the effects of the recent financial crisis. 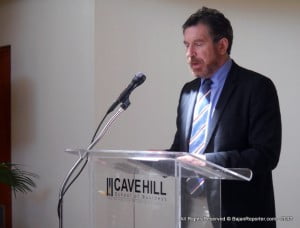 The new approved program will help address the social and economic challenges of these non-IDB member countries, constrained by their limited access to longer term and lower cost credit resources. The loan will support areas such as education, infrastructure, mitigation and adaptation to climate change and also policy based operations (up to 25% of the resources can be used to finance PBL’s). Resources will be allocated by CDB based on its country strategy and programming processes.

The IDB charter was amended in 1977 to allow the Bank to provide financial resources to the CDB to support its member countries. Prior to the approval of the new loan, the IDB had financed four global loan programs to the CDB totaling US$104 million, as well as various technical cooperation operations.

The approved program will be financed by US$14 million from the IDB’s ordinary capital, and US$6 million from the Bank’s Fund for Special Operations, (concessional funds) with an amortization period of 30 and 40 years respectively. CDB has lowered its fees on the concessional portion of the loan, in order for the beneficiary countries to access these resources at more favorable rates.