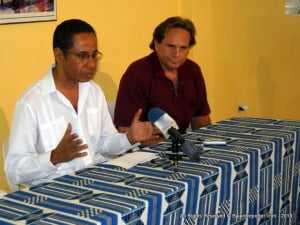 Raul Garcia held a Press Conference 2nd May 2013 at the Clement Payne Cultural Centre on Crumpton Street, Bridgetown. His Attorney did a scene setter before allowing Garcia to field Media Queries.

Attorney David Comissiong persuaded Raul Garcia to cease a lengthy hunger strike & took up the case of the former drug mule’s extended detention who, after a long battle of completing his sentence with model behaviour in 2010, has now emerged from jail in Barbados as illiterate regarding cellphones and computers.

Garcia‘s now learning about them from scratch, Skype is the only thing he’s really grasped so far – these and other challenges such as ascertaining if Garcia can gain citizenship here or if the UN or any territory can provide a haven are heard in this video which is the first of four in a series…