The Gale Theatre of Barbados and London, in association with Tiger Eye Theatre In Entertainment (TIE) and the National Organisation of Women (NOW) will be staging a series of Drama Therapy workshops for girls and women. 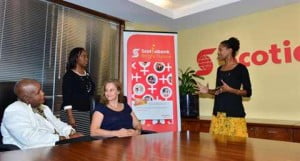 The facilitation of the workshops grows out of the staging of a two man play – “The Mountaintop” by Katori Hall by the Gale Theatre group which Producer Melissa Simmonds says gives a unique perspective on the final night of Martin Luther King’s life as it showcases him as a man as well as the colossus that he is often portrayed.

The play will take place at the Frank Collymore Hall on weekends from April 11th – 20th and will feature British actor Richard Pepple and Barbadian actress Keshia Pope.

The drama therapy workshops, the fulfillment of the Producer’s dream to work with Theatre in Education Specialist, Amanda Cumberbatch, are designed as an educational tool to help the women and girls deal with some of the turmoil and difficult experiences which they may encounter.

“This play is a good starting point to work from with the women, and the idea is to equip them with tools to help with various issues and set parameters for the future as well as build confidence” Ms Cumberbatch revealed in further explaining their involvement.

The workshops will take place on April 16th and 17th from 10 am to 12 noon at Harrison College.

The collaboration between The Gale Theatre, TIE and NOW is being facilitated by the US Embassy, Scotiabank and the Central Bank of Barbados and is the culmination of an idea that was born in 2008 between Marilyn Rice-Bowen and Producer Melissa Simmonds when she thought of trying to empower girls and women through drama therapy.

“Art offers us a mirror through which interpretations of our selves are reflected. Our main aim is to use theatre art’s highly interactive power to help stimulate positive change.” Ms Cumberbatch added in explaining the TIE programme and how it is used.

In addition to the workshops, 75 female students, from schools and Barbados Community College (BCC) aged 16 – 18 years, and women will be given complimentary tickets to view the matinee show on April 12th. This will include sitting in on a Q&A session with the actors after, in a session to be led by Amanda of Tiger Eye.

Scotiabank is particular pleased to participate in the workshops which will form part of their recognition for International Women’s Day 2013.