Barbados expert in renewable energy William Hinds has put his knowledge and experience to good use by writing and publishing Householders Guide to Cool Solar Houses. Recognising the work that the British Government is doing on climate change and renewable energy, he recently presented a copy to British High Commissioner Paul Brummell.

‘The book will help people make the key decisions in going solar,’ William said. ‘Those who would like to spend less on their electricity bills through energy conservation will find much of the book useful.’ 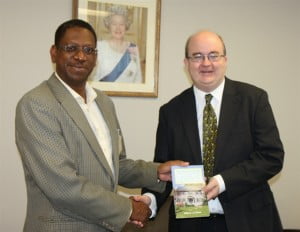 William is Chief Energy Conservation Officer with the Ministry of Energy and the Environment, and is well known for setting up the Solar Transport Project. He was awarded a UK Chevening Scholarship earlier in his career and studied at Reading University for a Masters degree in Alternative Energy for Developing Countries.

Paul Brummell said: ‘The British Government is committed to investing in renewable energy, which can produce major opportunities for growth. The impact of climate change is a fundamental threat to the world’s prosperity and security and so I applaud William’s work in helping to mitigate against global warming.’