St. Lucia’s current Groovy Soca Monarch Teddyson John has been having a truly blessed and productive musical year since capturing the title this past July with his smash hit “Land of Wine”. The talented and humble vocalist now has his sights set on making a powerful statement during the upcoming 2013 Trinidad and Tobago Carnival season.

Teddyson more commonly known as ‘TJ’ was recently on a promotional tour in the twin island republic and shared his ambitions of partaking in the International Groovy Soca Monarch competition in February.

TJ stated, “In addition to entering competitions my goals have always been to make a positive contribution to the music world, now in particular the Soca industry. Placing in competitions are fantastic, however, I’m really looking forward to building further strong connections in T&T as I admire and respect so many of the artistes, writers and producers in this country”.

According to several local and regional music enthusiasts and industry insiders, TJ’s latest Groovy offerings make him a strong contender for the title currently held by reigning champ Machel Montano. In addition to turning heads his with most recent hit song “Push Back” which is featured on the ever popular ‘Paradise Riddim’ alongside Montano, Kerwin Dubois, Nadia Batson and Farmer Nappy, TJ is still riding strong on the momentum of his Groovy Monarch winning “Land of Wine” which was produced by T&T’s own Precision Productions. 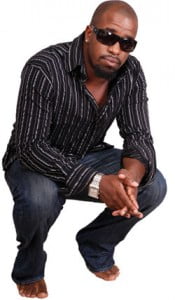 TJ who was also the first Groovy Soca Monarch of St. Lucia is a mainstay at the island’s renowned Jazz Festival and has toured the Caribbean region, the US, Canada and UK. Also, this modest crooner who has been compared to the likes of Krosfyah’s Edwin Yearwood is musically versatile and can flow from Soca (Groovy and Power), to Reggae, R&B and even Jazz in addition to being an accomplished keyboardist and drummer.

With an optimistic attitude, a musical spirit and two already pumping tunes, Teddyson John plans to ride the wave of success which he experienced in 2012 into 2013 and beyond. Having shared several stages around the world with some of T&T’s biggest artistes, this St. Lucian dynamo is ready to emphatically leave is stamp on the forthcoming festival season.