Digicel showed that its lightning fast 4G speed not only relates to its telecommunications network but also to its staff when it dominated the recent Run Barbados Series’ Digicel 4G CEO Challenge.

On Sunday 9 December 2012 Digicel came away triumphant in the inaugural challenge, which was incorporated within the Run Barbados Series’ 5K event.

The new event invited companies and organizations to enter a team of 10 participants, including the CEO, to compete against each other for the Digicel 4G CEO Challenge trophy and bragging rights for a year. 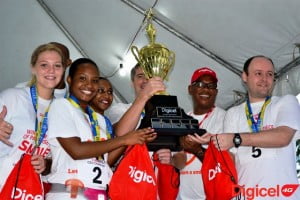 With a time of 22 minutes and 25 seconds, Digicel’s CEO designate, John Gilvarry, finished ahead of CEO’s from the Insurance Corporation of Barbados Limited (ICBL) and the Nation Publishing Company, to secure the title for the telecommunications company.

Commercial Director of Digicel (Barbados) Limited, Alex Tasker, said Digicel’s involvement in the event was fueled by its desire to assist with its revival: “The Run Barbados Series possesses a long history in Barbados being in existence for almost 3 decades. Over the last few years interest seems to have waned, which is a shame given the exposure it has given Barbados over the years thanks to the number of oversees entries. In an effort to revive this event and its contribution to Barbados, Digicel was happy to partner with the Barbados Tourism Authority to introduce this new element and drive its growth. The fact that we were triumphant in its first year is certainly a major plus because it definitely shows we are leading from the front. We therefore challenge more companies and organizations to join the challenge next year as we look to defending this title.”

Apart from just adding a new element to the Run Barbados Series, the Digicel CEO Challenge will also make a significant charitable contribution, with 50 per cent of each team’s registration fee being donated to a charity of each CEO’s choice.