This award was received by Mr. Escipion Oliveira-Gómez, Deputy Executive Director, on behalf of the Agency, who explained that: “This award was made possible through the hard work of the Agency’s staff as a whole and the support and guidance received from our Board of Directors, the CARICOM Secretariat, the CARIFORUM Directorate, the General Directorate for Multilateral Cooperation of the Dominican Republic (DIGECOOM) and the European Union”. He further elaborated that the “Agency will continue to partner with ADOEXPO and the regional private sector as a whole with a view to supporting the development of the regional private sector in its quest for global competitiveness”. 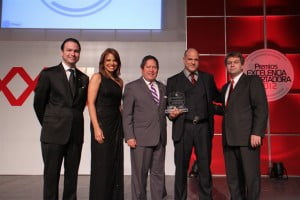 As the news of this award spread the Agency received congratulations from various sources including:

H.E. Ambassador, Colin Murdoch, Permanent Secretary of the Ministry of Finance and Economy and Chairperson of the Board of Directors who stated: “As Chair of Caribbean Export, I would like to express the appreciation of our organization for this prestigious award. We feel a sense of genuine partnership with ADOEXPO and wish to congratulate ADOEXPO on their continued success. I wish to thank the hard-working Agency staff, so ably led by the Executive Director Pamela Coke Hamilton, and all our other agency and stakeholder partners, and the European Union. Felicidades!”;

Mr. Iván Ogando Lora, Director General, CARIFORUM Directorate who expressed “...the recognition made by ADOEXPO demonstrates the work that has been done. Congratulations are in order and I can assure you that from the CARIFORUM Directorate we look forward to continue a close collaboration for the support of the region´s exporters and for making the EPA implementation process a tool for the real benefit of our CARIFORUM economies.”

Caribbean Export also received congratulations from H.E. Ambassador Irene Horejs, Head of the Delegation of the European Union to the Dominican Republic.