The country’s Human Resource Development programme is to benefit from a further injection of BBD$89 million (34 million euros) by the end of 2013, while BBD$15 million (5.8 million euros) has been set aside for Renewable Energy.

Once operational the new amounts will bring Barbados’ current active portfolio with the EU to BBD$143 million (55 million euros). 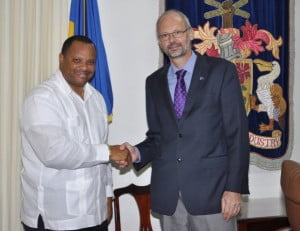 The purpose of the exercise was to review the various ongoing and recently concluded programmes financed by the EU in Barbados and provided an avenue to discuss the challenges and opportunities arising from the joint management of the portfolio.

A significant amount of EU grant aid provided to Barbados represents support to countries affected by the reform of the EU sugar regime in 2006 which led to a 36% reduction in the price of sugar.