A lucky Sol customer who test-drove with Sol and Simpson Motors has won the grand prize of a voucher for $1000 in Sol Go Further fuel just in time for his birthday celebrations and a month long vacation driving across Barbados. 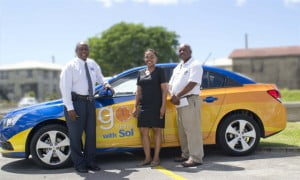 An elated and smiling Mr. Edwin Browne, who noted that he was a consistent user of Sol fuel, was presented with the birthday gift by Mr. Courtney Downes of Simpson Motors. He said the bonus fuel couldn’t have come at a better time:

“I’m going back to work in December and this is just enough fuel to carry me through, as I will be driving all over Barbados. I want to say that I am very satisfied with the mileage I get from Sol fuel; I normally top up on Monday’s at Sol Redmans, but this time I collected the voucher on Monday 29th, and topped up on Tuesday, in time for my birthday on the Thursday.”

The Go Further with Sol test-drive promotion allowed entrants carrying the official competition flyer to test-drive any Suzuki, Mitsubishi, Chevrolet or Subaru at Simpson Motors, and fill out the entry form for a chance to win the $1,000 in free Sol Go Further fuel.

In the final draw of the Sol Facebook promotion, Ms. Sherry-Ann Greaves emerged as the winner of the three-day Chevrolet Cruze test-drive, joining several other lucky Barbadians who over the past two months have endorsed the exciting and efficient combination of a Chevrolet Cruze powered by Sol Go Further fuel.

Among those weekly winners was Kareen Alleyne who stated:

“Thank you Sol Barbados! It truly was a good drive and you can take that from someone who has driven a lot of vehicles. The mileage compared to gas usage was also excellent…”

“What can I say so far about the Chevy Cruze and the fuel efficiency of Sol Go Further gas??…. It’s nothing short of PERFECTION!!”

Designed to improve engine performance and fuel economy, Sol Go Further fuel was launched in Barbados in June this year with a goal of giving motorists up to 10 kilometres more per tankful, based on average driving conditions with a 1.8 litre engine and a full 50 litre gasoline tank. The diesel version of “Sol Go Further” has been developed to increase power output, enhance engine life and reduce emissions, as well as to provide greater fuel economy.