The Breitling Jet Team, Breitling Wingwalkers and Yves “Jetman” Rossy are flying East for winter, to bring Breitling’s passions for aviation to new audiences in what is being collectively called “The Breitling Dragon Tour”.

All three teams are heading to Asia to participate in Airshow China 2012, held in Zhuhai, Guangdong province. Although the 1940’s Stearmans of the wingwalking team and Yves Rossy’s Jetwings can all be shipped there in containers, the Breitling Jet Team will have to get there with their own wings. 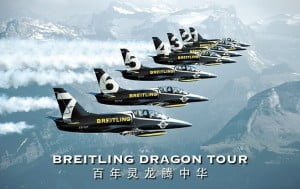 Leaving from Dijon, they will fly this week through Eastern Europe, into Russia passing through Siberia, then on to Mongolia and down through China to reach their destination by mid-October.

Breitling Aviation Director, Nigel Lamb flew the first civilian aerobatic team in China in 1996: “There is such an incredible fascination and enthusiasm for aviation in China, the team is well remembered even to this day. I’m looking forward to going back with all three teams and entirely different spectacles from Europe. Hopefully, this is just the start of the adventure. We’re looking into keeping the Breitling Jet Team in Asia for 2013 and organizing a series of tours in the region.”

Breitling Jet Team leader, Jacques Bothelin continues: “While we are there we want to make the most of our opportunities, we will miss the European 2013 season, but it will be exciting to explore new countries and display to new crowds. We’ll be back in Europe early 2014 with some great experiences to relay.”