To evaluate an American president’s foreign-policy performance after one term is challenging, given the complex diplomatic and strategic environment and significant domestic constraints that confront every US president.

Nevertheless, in advance of November’s presidential election, it is important to distinguish the forces that have shaped Barack Obama’s foreign policy, and to assess his handling of them.

Obama kept his promise to withdraw American forces from Iraq during his first term. But the move proved to be a strategic defeat, given that it significantly diminished the United States’ political influence in Iraq.

Indeed, Prime Minister Nouri al-Maliki’s government is becoming increasingly allied with Iran. Obama, who opposed the Iraq war, should not be blamed for current circumstances there. But he was unable to improve the situation or help Iraq’s Shias and Sunnis reach a political compromise.

In contrast, Obama expanded the war in Afghanistan – which he considered to be a war of necessity – and put the Taliban on the defensive. But the US will begin to withdraw troops after 2014, without having defined a political solution in line with its interests.

Meanwhile, America’s strategic partnership with Pakistan, where Obama won a significant symbolic victory by eliminating Osama bin Laden, is in tatters. US-Pakistan relations have regressed to their level before September 11, 2001, with mutual distrust minimizing cooperation. In fact, in all of the strategic challenges to US security that Obama inherited – Iran, North Korea, Iraq, Afghanistan, Pakistan, and the Israeli-Palestinian conflict – he has made virtually no significant political gains.

Notwithstanding Obama’s skillful response to the Arab Spring – the only strategic surprise that he has faced as president – his credibility in the Muslim world has steadily declined. He has failed to deliver on the key promise of his Cairo speech in 2009: “to seek a new beginning between the United States and Muslims around the world.”

Moreover, Obama’s efforts to improve relations with Russia – embodied in the Strategic Arms Reduction Treaty (START) – did not lead to a genuine “reset” in bilateral ties, largely because an increasingly Soviet-style Russian leadership distrusts a US establishment that still regards Russia as a foe. And the US-China relationship has deteriorated, with America seeking to manage China’s rise strategically – for example, through regional trade agreements and an enhanced military presence in Asia. 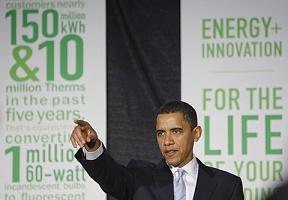 {IMAGE VIA: the-environmentalist.org} On multilateral issues, Obama’s performance is equally unimpressive. After committing to a 17% reduction of greenhouse-gas emissions by 2020 – and despite his declaration that he would not tolerate inaction in this area – he simply stopped raising the issue after the Republicans’ sweeping victory in the November 2010 mid-term elections.

Likewise, domestic pressure has caused Obama to neglect trade issues. The US is largely responsible for the failure of the Doha Round of global trade talks.

Obama’s one significant foreign-policy breakthrough has been to release the US from the grip of the “global war on terror.” Jettisoning the Manichean rhetoric of that “war” allowed the US to regain the political legitimacy that former President George W. Bush had lost, without diminishing its strategic credibility.

After the Vietnam War, Jimmy Carter hoped to make a break with established US policy. But his administration’s actions – including serious blunders in Iran and Afghanistan – made the US appear weak and indecisive. While Obama’s policies have not weakened America’s international standing, they also have not led to achievements comparable to Richard Nixon’s rapprochement with China, largely owing to what might be described as the dogmatic pragmatism that underlies them – an emphasis on avoiding the worst, rather than on striving for the best.

Moreover, Obama has been confronted with significant constraints, including the global economic crisis, domestic political polarization, a hostile Congress, and the rise of emerging powers that need the US but are unwilling to accept its dominance. As a result, he has failed to change strategic realities by, for example, reconciling America’s broader interests with those of Iran (a declared enemy), Pakistan (a “frenemy”), and Israel (a key ally).

To be sure, Obama faces a more complex diplomatic and strategic environment than Nixon faced in the 1970’s. Unstable coalitions in Iran prevent any substantive negotiations between the two countries, while political fragmentation in Pakistan significantly hinders US policy there. And the fragility of Israel’s ruling coalition, combined with strong congressional support for Prime Minister Binyamin Netanyahu, makes it difficult to influence the country’s policies, despite Israel’s significant impact on US strategy in the Arab world.

But Obama has also struggled to define the terms of a possible grand bargain. Any agreement with Iran would require consent from Israel and the Gulf countries, which do not share the same objectives. And the US cannot reach an accord with Pakistan without India’s consent, which America would be unable to force, especially given that it relies on India to counterbalance China’s growing clout in Asia.

With Israel, the terms are ostensibly simpler: in exchange for a stronger US security guarantee, Israel would accept the establishment of a Palestinian state based on the 1967 borders. But Israel is also a crucial domestic political topic in the US; indeed, any distancing from Israel is unacceptable to most Americans.

While Obama’s first term could not be called a foreign-policy disappointment, his achievements – although not trivial – have been limited. If he wins a second term, he is likely to find it increasingly difficult to win by playing not to lose.