The Eastern Caribbean Supreme Court has its first female Chief Justice.
In a letter to Montserrat’s Governor Adrian Davis, the Honourable Justice Janice Mesadis Pereira stated how she received notification from the Crown Office of the Ministry of Justice in England that her appointment to be Chief Justice for the ECSC had been confirmed.

The notice included a copy of the Letters Patent signed by Her Majesty the Queen on 28 September 2012, appointing Pereira to be Chief Justice. The notice of appointment was published in the London Gazette on 4 October 2012. 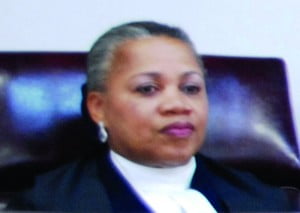 Chief Justice Pereira was born on Virgin Gorda in the British Virgin Islands, succeeds Nevisian-born Sir Hugh Rawlins. She obtained her law degree with honours from the University of the West Indies in 1979 and the Legal Education Certificate from the Norman Manley Law School in 1981.

She served as a law partner in Farara George-Creque & Kerrins and engaged in active practice at the Bar in the conduct of matters at all levels of the Courts from 1985 to 2003 in Tortola, BVI.