For the uninitiated, especially foreign observers, the United States’ presidential election campaign can seem like an epic narrative in which the protagonists pass through various trials en route to salvation, with the US media’s nonstop coverage resounding like a Greek chorus. Now that the made-for-television Republican and Democratic conventions are over, the odyssey of President Barack Obama and his Republican challenger, Mitt Romney, continues with three face-to-face encounters in October.

The first debate is scheduled to take place here at the University of Denver on October 3. Both candidates received some (well-deserved) criticism during the conventions for appealing to peoples’ emotions instead of addressing facts and policies. In the debates, that should change as they confront each other directly while making their case to voters. 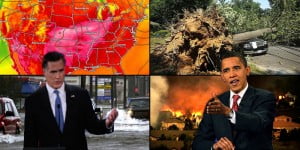 {IMAGE VIA – lcv.org} But October 3 is only the beginning. The vice-presidential candidates will square off on October 11, while Obama and Romney will meet again on October 16 and then for the last debate, on October 22. (CLICK FOR BIGGER)

Foreign policy has made few appearances in the campaign, but the final debate is supposed to be devoted to the subject, thereby giving voters a sustained view of how the candidates view the world. Obama has spoken periodically over the course of his presidency about foreign policy (albeit before the current campaign), whereas Romney has said far less. Anxious to distance himself from the legacy of the previous Republican administration, he never mentions former President George W. Bush and avoids mention of the two wars of the last decade.

Indeed, when Romney formally accepted the Republican nomination at the party’s convention, he went so far as not to mention US troops in the field, an omission that the Democrats pounced upon when their convention met a week later. Ironically, it is the Republicans who have prided themselves in recent years as the party that took up President John F. Kennedy’s call to “pay any price” and “bear any burden” in defense of liberty. But both Romney and his running mate, Paul Ryan, display little or no interest in foreign affairs, apart from assuring voters that Israel’s interests will be safeguarded, Iran’s will not be, and whatever the US does must be tough and strident.

Though the third debate will address foreign-policy issues, viewers will probably remain starved for signs of what might follow in terms of statecraft. Foreign policy in US politics is often an exercise in demonstrating strength rather than wisdom. On Iran, the debate will, at best, address how to “solve” (no one will dare say manage) the nuclear threat by using sanctions and military action. A serious discussion of how to sustain fledgling multinational negotiations between Iran and the world’s six most powerful countries (the so-called P5 + 1) – a process denounced by many American pundits as a waste of time – is unlikely.

Indeed, Iran’s nuclear aspirations, one of the most pressing issues of our time, may well be reduced to whether the US should support Israel in the event that its government takes military action. One is hard pressed to find any analyst who believes that Israeli air strikes could do more than set back Iran’s program for a few months while unifying fractured Iranian opinion around support for nuclear weapons.

Another fundamental question, China’s standing in the world order, is unlikely to be discussed in any meaningful way. Indeed, one can expect the debate to center on how to confront China in the short term, rather than on how to nurture long-term cooperative ties. Most Americans have not yet embraced the idea that the US-China relationship is too big to fail. Today’s China seems to recall Winston Churchill’s description of Russia as a “riddle wrapped in a mystery inside an enigma” – a new, great power rival that is difficult for US policymakers to understand.

Likewise, Obama and Romney may have tacitly agreed not to discuss the policy choices surrounding the tragedy in Syria, because neither has any interest in addressing its internal complexities, mastery of which will be essential to galvanize international support for an eventual political solution. In the meantime, Syria and its daily carnage have become the dreariest and most numbing foreign-policy issue in American public opinion, despite the danger that the violence could spread across the Middle East (particularly to neighboring Iraq and Lebanon). The export of Syria’s civil war is likely to consume far more time in the coming months than either candidate wants to admit. 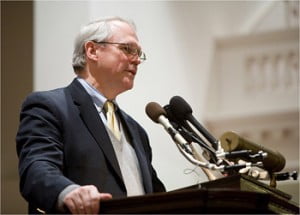 Christopher R. Hill, former US Assistant Secretary of State for East Asia, was US Ambassador to Iraq, South Korea, Macedonia, and Poland, US special envoy for Kosovo, a negotiator of the Dayton Peace Accords, and chief US negotiator with North Korea from 2005-2009. He is now Dean of the Korbel School of International Studies, University of Denver. {IMAGE VIA – cms.amherst.edu}

Other foreign-policy issues cry out for serious discussion and debate: addressing absolute poverty and pandemics in the global South; strengthening global governance, including undermanned and outmoded United Nations structures; international cooperation on the rising number of natural disasters; and rethinking Afghanistan/Pakistan with the understanding that Pakistan is far larger and one angry mob away from a loose nuke – and therefore should not be reduced to the role of a supporting actor in Afghanistan’s travails.

Finally, North Korea’s nuclear aspirations are a hearty perennial for any US president. Joint US-Chinese effort on this issue could potentially provide the elusive key to an improved relationship. Yet this issue, too, is unlikely to receive the attention from the candidates that it deserves.

Whether Americans like it or not, with Europe, China, and India largely consumed by domestic politics, international leadership and stewardship of the world’s problems will remain firmly in US hands. And yet the US election campaign, even the upcoming October debates, will leave most observers wondering whether any country is in charge.