Citizens in Defence of Grenada’s Lands & Heritage’s thoughts on the appointment of Amb. Peter De Savary

This is an extremely long yet interesting Opinion on Grenada’s Environment as it juxtaposes with Business, Tourism & Politics, when this warning appears and it concerns the Spice Isle you know it’s Sandra Ferguson who’s created many an intriguing time for me here at Bajan Reporter.

Therefore in an effort to avoid further chaos? I do not necessarily subscribe to the views expressed and please consult the actual author of the article instead…

Investment Ambassadors and the Matter of “Restoring Integrity, Renewing Hope and Building Together”.

• “Heavy is the head that wears the crown” and should anything go horribly wrong you, Sir, as the one “wearing the crown” will be the one ultimately accountable and responsible………”

• “Why then does it seem to be treading the same economic path that was beaten by the New National Party? Why is the interests of foreign speculators taking precedence over the interests of we, the people?”

• “Let it not be said Hon. Prime Minister that, under your watch, “the hand basket was safely delivered to hell and to the Devil himself”!!”

1. Ambassadors and the NDC Administration:
I am still REELING from shock on discovering this last week that Peter de Savary is, in fact, Ambassador Peter de Savary, courtesy the National Democratic Congress administration. By chance, I came upon the following on his website : –

“In 2012 Peter de Savary was appointed by the Government of Grenada as an International Ambassador with full diplomatic status and responsibilities for inward investment.
As the major foreign private investor in Grenada he energetically extols, promotes and facilitates the many opportunities available for qualified foreign investors.”

I had heard that this matter was under consideration which is why I addressed the question to Hon. Karl Hood, former Minister of Foreign of Affairs in my letter of May 21st, 2012. What can an administration and party which was elected to office on the promise of ,“Restoring Integrity, Renewing Hope and Building Together” be thinking??!!! Why has this appointment been SO QUIET? Where the hell is TRANSPARENCY?

So now, it has finally sunk home that the Task Force Review is DEAD. Any expectations that I was still FOOLISHLY harbouring that the findings would be revealed and concerns would be allayed can now be BURIED. Perhaps, the setting up of the Task Force was a FARCE from the beginning!

And now I understand that maybe de Savary’s appointment is only the latest in a string of appointments which BAFFLED the nation, beginning almost as soon as the new administration got into office. Can anyone remember the bulls**t explanations offered by then Minister of Foreign Affairs when the people found out about the appointments of:

• Ambassador Georges Cohen of Calivigny Island fame who presented his credentials to the United Nations Office in Geneva, Switzerland in October 2008 – almost FOUR months after the NDC administration was elected to office in July 2008? The Minister explained that the Ambassador had been appointed earlier in the year by the previous NNP regime but had only just presented his credentials in October. HellooOOoo!!!! But NDC was NOW in charge. So it must have been with your approval!
• Ambassador Earleen Taylor of the Levera Resort Development: – Sometime in November 2008, the website of this ambassador came to light. There was never any response to queries about this ambassador except that the then Minister of Foreign Affairs took the pains to tell me that this lady was not an Ambassador. I suppose his busy schedule never permitted him to visit her website(s).

2. Cheltenham Report 2007 on the Matter of Non Nationals as Ambassadors:
The issue of non-nationals as ambassadors, particularly investment ambassadors, has always been a contentious issue, given the experience under the regime of the New National Party. So when the Cheltenham Enquiry was set up in 2004 to look into the “brief case affair” involving the then Prime Minister (now current Leader of the Opposition) and Eric Resteiner, one of its Terms of Reference was to:

The report noted that a principal weakness of the system was the absence of criteria for selection and observed “that those serving have been able to propose themselves and be accepted. Often their claims are widely exaggerated and downright lies.”

2.1 Recommendations of the Cheltenham Report:
The Cheltenham Report made the following recommendations in respect of the appointment of non-nationals in the diplomatic service of Grenada:
• Volunteering to be Ambassador: Those who volunteer their services must be excluded. They almost always have an interest of their own which may be wholly inconsistent with the best interests of the country. They want the job for their own interests, not the country’s.
• Due diligence and background checks: Extensive background checks and due diligence should be carried out from various sources including banks and Dunn and Bradstreet reports.
• Diplomatic Status: All appointments should be made by Cabinet and those appointed should not qualify for diplomatic passports but official passports.
• Term Limit: There should be a definite period of time and a term limit for appointments.
• Oversight and Accountability: Ambassadors-at-Large, Trade Commissioners and Honorary Consuls must be under the supervision of the Missions in their jurisdiction or the Ministry of Foreign Affairs in Grenada. They must be obliged to report periodically on what business is being generated and the activities in which they are involved.

3. Ambassador Peter de Savary:
If the current administration was serious about building institutions, restoring integrity and building together, how CAN this appointment be rationalized, given all the controversy that has surrounded Peter de Savary and his Port Louis investment. Like ostriches, his cheerleaders in the private sector and the National Democratic Congress may wish to bury their heads in the sand. However, the questions and concerns over the lack of TRANSPARENCY in respect of the transfer of the people’s property for EC$1.00 to Peter de Savary’s Port Louis WILL NOT GO AWAY. 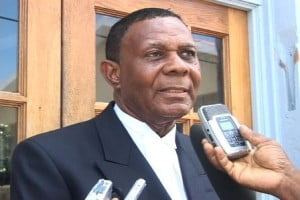 {FILE IMAGE} In the context of the recommendations of the Cheltenham Enquiry, which has explicitly recommended that non-nationals should not be given diplomatic status, it seems reasonable to ask the following questions:

4. Peter de Savary and Foreign Private Investment in Grenada:
In addition to the fact, that the choice of Peter de Savary as an Investment Ambassador, CONTRADICTS the express, unambiguous recommendations of the Cheltenham Report on the appointment of ambassadors, there are a number of other COMPELLING reasons why Peter de Savary is an INAPPROPRIATE choice to be an Investment Ambassador:
1. Secrecy and the Deed of Release of October 5th, 2006: The transfer of the “people’s property” – Islander Hill, Ballast Ground and the Lagoon – is shrouded in secrecy. 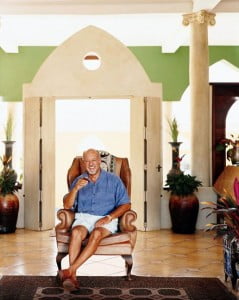 {FILE IMAGE VIA – cntraveler.com} The Deed of Release of October 5th, 2006 which facilitated the transfer of the people’s property from Poole Capital to Peter de Savary’s Port Louis is NOT RECORDED in the Deeds and Lands Registry – a rather unusual circumstance in respect of transactions involving the “people’s property” and public interests.

2. Real Estate Speculator: Ambassador de Savary is really a foreign real speculator – buy low, sell at (profits) buoyed by extra-ordinary tax concessions transferable to subsequent buyers over a period of 20 – 25 years. The agreement in respect of Mt. Cinnamon is instructive in respect of the extra-ordinarily generous… TAX EXEMPTIONS afforded Ambassador de Savary’s “investments”(?):
corporate taxes for a period of 20 years.

Transfer of Incentives: ALL OF THE INCENTIVES MAY BE TRANSFERRED with the disposal of any land property or operation to which they relate.

3. Displacement and Relocation of Squatters: An estimated 70 families were displaced from Islander Hill-Pandy Beach area into unfinished houses and squalid conditions in La Sagesse and Beausejour. 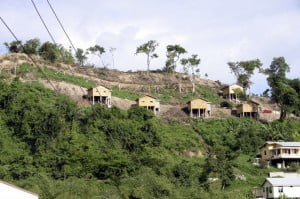 {CLICK FOR BIGGER – La Sagesse; Houses for relocated persons} Mr. de Savary claims that Port Louis spent US$1.325 million dollars to relocate the displaced families. Who is accountable? Who got paid? Now, the Government of Grenada must take on the costs of alleviating the conditions of these families.

5. Peter de Savary,Port Louis and Park Town Capital PLC:
An April 28th, 2008 press release originating in the United Arab Emirates announced Peter de Savary’s partnership with Park Town Capital PLC to develop luxury residences at Port Louis Grenada and also mentioned partnership with Nikki Beach to construct a 5-star hotel in the Port Louis. That was the last we ever heard of these two partners from Peter deSavary. The following is worthy of note:
• Nikki Beach: Via various press releases and newspaper articles, the following information was gleaned:.

• The story also advised that “he will also shortly unveil a five-star hotel in Port Louis, Grenada, where he is overseeing a $500m (£319m) residential and leisure development”.

6. No to Ambassador Peter de Savary:
What is the justification for the appointment of Peter de Savary’s as an ambassador? As a citizen of Grenada, I am AFFRONTED by the appointment of Peter de Savary as an Investment (??) Ambassador with full diplomatic privileges. It is my considered opinion that this appointment adds INSULT to INJURY and “rubs salt in the wounds” of we the people in respect of the transactions regarding the “people’s property” – Islander Hill, Ballast Ground and the Lagoon. This action of the National Democratic Congress administration is incomprehensible. I can only conclude that “what dey gi dem to rub, dey eat!”