While human trafficking is often described as an “invisible crime” because its victims can be so difficult to identify, 35 Barbadians are now better equipped to see and help victims of modern-day slavery.

Thanks to the United States government, officials from a range of law enforcement and social welfare agencies, as well as representatives of relevant non-governmental organizations received in-depth training on how to identify and combat human trafficking. 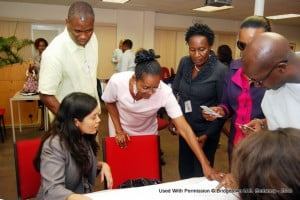 Assistant U.S. Attorney Barbara Martinez (sitting at left) and workshop participants discuss strategies and ideas during the trafficking in persons workshop hosted and funded by the United States government.

Agencies and groups participating in the training included the Immigration Department, Office of the Attorney General, Minister of Labour and Social Services, Bureau of Gender Affairs, Ministry of Family and Youth, Minister of Defense and Security, Ministry of Foreign Affairs and Trade, Child Care Board, Welfare Board, Business and Professional Women’s Club and the Royal Barbados Police Force.

Participants praised the impact of the three-day workshop, hosted by the U.S. Department of Justice’s Office of Overseas Prosecutorial Development, Assistance and Training, with one workshop attendee noting:

“We have come to the realization that we need to open our eyes to what’s happening around us and make sure that everyone is aware of what trafficking in persons is.”

During the workshop, participants worked on issues such as developing a victim-centered approach, identifying instances of trafficking in persons, challenges in investigating TIP cases and how to use a task force approach to combat trafficking and interviewing victims.

Assistant U.S. Attorney Barbara Martinez, who led the workshop along with Supervisory Special Agent for Immigration and Customs Enforcement Tonja Marshall, was encouraged by what she heard and saw.

“The workshop was a resounding success. Everyone was very interactive and dedicated to exploring new ways of proactively identifying trafficking in persons. They presented original ideas and worked well together,” said Martinez.

She lauded the Barbados government for establishing a national task force on human trafficking, saying it laid “a strong foundation.”

The workshop, which cost approximately US $10,000 was funded by the U.S. Department of State’s Office to Monitor and Combat Trafficking in Persons.