{LATE 2004, A FEW DAYS FROM 2005} “JOHN CLEESE, ONE OF THE FOUNDERS OF THE COMIC GROUP “MONTY PYTHON’S FLYING CIRCUS” AND STAR OF THE FAWLTY TOWERS SERIES THAT SHOWED HERE IN THE 80’S, IS BACK IN BARBADOS YET AGAIN TO HOST A FAMILY REUNION AND TO COMPLETE SOME WORK ON HIS WEBSITE…”

{2004 FLASHBACK CONT’S} No I was not his 3rd wedding, ok? Interviewed him while at CBC… “(CLEESE) SAYS HE’S BEEN INVITED BACK (TO ‘SHREK THE THIRD’) AND HE’S ACCEPTED WITH GLEE, AS BEING A VOICE ACTOR IS VERY EASY COMPARED TO REGULAR ACTING…”

I think that was his 2nd Marriage at that point and his website was always joking about lemurs, yet from Barbados and his 3rd Shrek voicing, he’s sauntered off to Mustique and the Brit publication “Hello” Magazine says why;-

Comedy legend John Cleese has married for the fourth time, saying of his beautiful new bride Jennifer Wade: “She is an extraordinary one off.”

The Monty Python and Fawlty Towers star, who fought back tears as he wed Jennifer in Mustique, added:

“I knew from the first moment I met her that this could be something very serious.”

After what happened you think he’d just have a fling or two, but he insists on taking risks…

The ceremony was conducted by a Methodist minister on the island’s most exclusive villa and HELLO! Magazine was present to capture all its emotional glory in its print edition on sale now.

Jennifer added of it: “We’re kindred spirits. When people see us together, they immediately get it.” 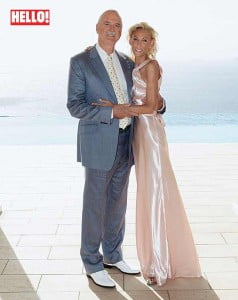 At 41-years-old she is 31 years younger than the 72 year old comedian but the age difference “never bothers us” Jennifer tells HELLO!.{CLICK FOR BIGGER}

The wedding comes four years after Cleese’s acrimonious divorce from his third wife Alyce Faye Eischelberger which cost him a huge chunk of his fortunes.