The CARIFORUM-EU Economic Partnership Agreement (EPA) took centre stage as Caribbean Export Development Agency (Caribbean Export) hosted two days of high-level meetings to discuss the way forward for the region in the implementation and utilisation of the EPA. 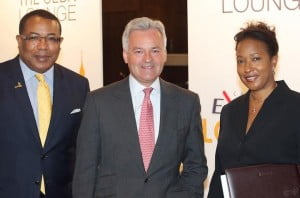 “The EPA is a very important foundation for us in the region to build on and utilise, with respect to tapping into the European market place”, commented Pamela Coke Hamilton, Executive Director of Caribbean Export in her opening remarks. “However, we need to continue to put in place mechanisms to enable our private sector, for example, agro-processors and creative industries, to take advantage of the Agreement. This meeting is one, important step in that direction…”

On the first day of the Forum, Director General of the CARIFORUM Directorate, Mr. Ivan Ogando-Lora, spoke about the present situation surrounding the EPA implementation in his presentation and echoed the sentiments of Mrs. Coke Hamilton, “CARIFORUM is open for business and is unflinching in its commitment to implementing the EPA”. 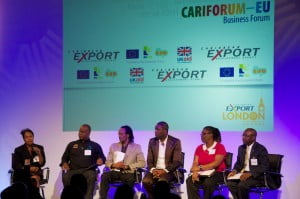 Day two of the meetings saw a number of breakout sessions, which focused primarily on the recently concluded Manufacturing and Cultural Industries Study Tours to the United Kingdom, Germany and France. In particular, the sessions covered issues related to Standards, Intellectual Property, Sanitary and Phyto-Sanitary requirements, Market Intelligence and Technical Assistance. The Forum ended with recommendations for enhancing CARIFORUM-EU trade and investment relations.

The fifteen signatory Caribbean Forum of African, Caribbean and Pacific (CARIFORUM) States to the EPA are the independent CARICOM Member States and the Dominican Republic.