Warrior King has done it again-released a hit worthy reggae song laced with powerful words on an infectious riddim. He continues along his path of creating inspiring music that reaches into the hearts of his fans worldwide. Warrior King aka Mark Dyer blazed on the scene with the Dancehall Conscious hit Virtuous Woman in 2001 and sent notice to the world that that he was going to be a force to contend with in the world of Jamaican conscious reggae music.

After entering the industry in such a powerful way Warrior King has spent the past decade making other hits and performing in venues around the world. He has matured as a song writer, performer and singer. 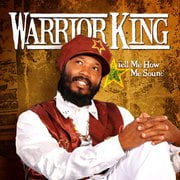 For more information about Warrior King and the Mind Change Riddim go to www.facebook.com/WarriorKingMusic or email inspiredbookings@gmail.com

This maturity is very evident in the song “Changes” on the Mind Changes Riddim. The song’s lyrics hold a powerful message about the changes that everyone inevitably faces through life and highlights the artiste’s versatility and talent as a song writer and singer. Strong lyrics are complemented with a smooth singing style that fits perfectly on the hypnotizing dancehall track.

The MIND CHANGE riddim was produced by Anil “Phantom” Montaque of Inspired Music Concepts. Montaque returned to Jamaica from Zurich, Switzerland after playing with the sound system Black Phantom Sound. Inspired by the music he was playing as a selector, he wanted to try creating such riddims, so he bought his own Midi Keyboard and started to produce music.

While still in Switzerland Inspired Music Concepts was founded by Phantom and in the labels own studio in Zurich he produced a sound track for a documentary movie. “Like a Lion” OST featured well known artistes such as Munga, Fantan Mojah and Cali P. “Like a Lion (Hotsteppa)” and “No Time” both single releases from the soundtrack got heavy rotation on the top Jamaican Reggae radio and TV stations.

Phantom composed the Mind Change Riddim on his Fantom G6 keyboard, while the studio was still under construction in early 2011. When he started to manage Warrior King in January 2012, he got to show Warrior the riddim. Warrior King instantly felt Inspired to try something new and put his positive message on this melodic dancehall riddim.