Shortly after World War 2 if you said you had a camera or a car “MADE IN JAPAN,” you’d be sure to hold many a sneer or rude joke… When India’s film industry was given the nickname of Bollywood, it was done almost as derision, now it it is considered as a genre or even a musical flavour!

Many US college students use Haier baby fridges for their dorms while away from home, here in Barbados a proper cooling fan is usually felt to be a Jialing which is so powerful it’s more like a wind machine for a movie than air conditioning! Many young entrepreneurs can be seen tooling around Barbados in a small pick-up truck made in Beijing, yet two decades ago China was only felt to be qualified in construction…

In the foreground, Ray Chee-A-Tow from Banks Breweries is among those attending Haiyan Wang’s lecture, so the references made to SAB Miller must have special connotations for the Sr Mgr

These countries were also at low ratings thanks to S&P or Moody’s and loans made it very hard for them to borrow, so they learned not to rely on a single industry but expand their promise in other areas…

China was felt to be good for rice at one point while India was renowned for cotton, Japan was known for assembly-line imitations of many popular gadgets and now they are considered leaders in Kinetic watches like Seiko, Nikon is synonymous with Fine Art photography, Toyota is known for cheap yet quality transportation and so forth.

India on the other hand did not simply just rely on cinema after placing cotton on the back burner (still there, only not as significant), they are now famous for their IT sector and digital animation – outstripping even South Korea from time to time!

At the Cave Hill School of Business, they recently were host to Haiyan Wang, her blogs on business acumen grace the Harvard Business Review while Business Week gets a weekly column from the active entrepreneur who’s also the managing Partner of the China-India Institute.

Her topic was “Building Global Competitiveness” which ironically in hindsight is perfect advice to the Central Bank after the recent Downgrading of Barbados’ Credit Rating. I say this since the CBB’s Governor seems to have an excessive reliance on Tourism saving Barbados when hotels are closing, the time is come for us to look at Info Technology as a means of generating revenue apart from opening the Film Industry, much like India…

Wang’s talk showed how the South African Brewery started as a small firm and eventually bought Miller and became a giant under the name of SAB Miller, now among the Top 5 Beverage groups in the world.

Part of her talk examined ways Barbados can seek niche markets so they can expand in small yet powerful ways, like how in China, they have Moon Cakes which are very popular and the more elaborate the more desired they are – since we in the Caribbean are known for rum-cakes why not create a rum-soaked Moon Cake for Chinese diplomats and businesses? {CLICK ON FOLLOWING LINK FOR FULL AUDIO}

Moon festivals means lots of Moon Cakes, so why not chase after the market where Barbados rum can be exported in a unique way?

Another area which the speaker examined was how Beijing has many undeclared millionaires and billionaires, they only want to travel first class and shop for expensive leather bags and exclusive jewellery, now India is starting to catch up faster every year {CLICK ON FOLLOWING LINK FOR FULL AUDIO};-

Pierre Gervois was a hit at Needham’s Point in October 2010 when his accent made certain words appear to be completely different, many audience members thought it was a real life version of “Allo-Allo”

This was confirmed almost 2 years ago at Hilton Barbados when the CTO had a seminar which looked at just that, the untapped Asian clientele which Pierre Gervois scrutinised at length {CLICK ON FOLLOWING LINK FOR FULL AUDIO};-

The French expert says they want to play golf, they love to make lots of videos where they enjoy lavish lifestyles of travelling in helicopters and limousines.

Haiyan Wang told participants at the CHSB that moving around her Government’s restriction of viewing Google is a lot easier than many realise, keep searches business-related and use alternative search engines {CLICK ON FOLLOWING LINK FOR FULL AUDIO};-

Two years ago, searches were difficult even for trade purposes, but when one uses alibaba dot com this is what importers and exporters use to locate each other.

The China-India Institute’s Managing Partner says even if you start small, it does not keep your options limited, she recalled when the Haier company in 1984 was known more for air conditioning and large refrigerators but not very good, until a new manager started his tenure by smashing defective appliances in public and vowing better equipment from hereon in… This was Headline News for China back then, where fridges are viewed as a long-term investment.

They learned how to respond to their customers’ needs, when they realised many people in Beijing had small space in apartments and thus few suits or dresses, they made washing machines which were big enough to do a change of clothes alone. 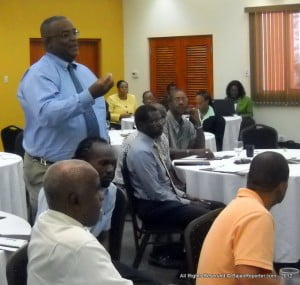 This guest disagreed with Wang and did not feel Barbados should try expanding now, but the Adjunct Professor at INSEAD saw it as “The world is your oyster, do you have the right fork?”

By building on these small successes they eventually partnered with German manufacturers as well as Mitsubishi which allowed them to ease into the American market with small fridges which not only college teens liked but eventually small to medium restaurants preferred to chill their wines in.

Haier in nearly 3 decades has moved from a small Chinese company to a global manufacturer by planning and optimism according to Ms Wang. This was a similar history for SAB Miller which began almost as a micro-brewery…

SAB specialised in transforming state-owned breweries into healthy franchises, which other agencies tended to avoid, they used Market Feedback and aimed for Larger Distribution which eventually changed their success from 1987 as an SME, by 2006 they bought Miller {CLICK ON FOLLOWING LINK FOR FULL AUDIO};-

In 2002 they approached markets of India and China which allowed them to “pee like the big dogs” and created the scenario where buying Miller and adding it was not impossible!

Wang told UWI that swift thinking, ideas and decisions were what made SAB Miller the success it holds now. Cave Hill also plans to have available both “Getting China & India Right” as well as “The Quest for Global Dominance” available at UWI’s bookstore in the near future.