Rugby has been regaining popularity in Barbados recent times and the Barbados U19 Squad is currently hard at work training for the NACRA (North American and Caribbean Rugby Association) Under 19 Championships, which will take place July 7-14, 2012 in Mexico City, Mexico. Other participants there will be defending champs Cayman Islands, as well as Jamaica, Bermuda, Trinidad and Tobago, Guyana and hosts Mexico.

The action kicks off with the Barbados Select (seniors) team facing off against Birkenhead Park Football Club, who will be on the Barbados leg of their Barbados & Trinidad tour.

Birkenhead Park FC was formed in 1871, the same year as the Rugby Football Union, and there are only a handful of clubs in the rugby world that have a longer history. It seems particularly fitting that they will be playing against the local Select XV at the Garrison Savannah, which has been officially designated as a UNESCO World Heritage Site. Their team will play in Barbados as part of a tour that will also take them to Trinidad and Tobago.

Ben Hoyles, who toured Barbados with Wisbech Grammar School in 2002 and also played Rugby as a guest for a touring side against a Barbados select XV at the Garrison, went on to play for England U20 alongside Toby Flood and Tom Croft before being forced to retire due to injury. Alistair Price who was awarded player of the series against Barbados Schools in 2009 is now playing for Scotland U20 and Saracens.

This year Wisbech Grammar School are playing Rugby at the Garrison against Barbados Schools, a Trinidad Select Team, and Datchworth. The girls will also be playing sevens. As well as the Rugby, the boys are playing Hockey and Cricket. With the help of Mrs. Kath Stewart, Wisbech are trying to arrange a floodlit Cricket game at the UWI ground. The girls will also play Hockey as well as Netball. 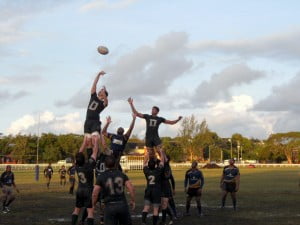 {FILE IMAGE – CLICK FOR BIGGER} The Barbados Rugby Football Union was formed in 1964. A clubhouse was erected at the Garrison Savannah, which has become the home of Rugby Barbados. This area has been officially designated as a UNESCO World Heritage site. In November 2011, despite torrential rains, the BRFU were proud to host the DHL NACRA 7’s championships at this location. Guyana won the men’s draw and Canada the women’s. 27 teams from 17 territories, took part, attracting significant numbers of visitors to our shores, and thousands of internet viewers to the live streaming of the 84 matches.

The Wisbech tour party is looking forward to coming to Barbados on July 5, 2012 and the staff particularly Mr. and Mrs. Phil Webb, who were married in Barbados in 2003.

The first tour to Barbados was organised through Mr. Don Gooding of Sporting Getaways. Wisbech Grammar School are also lucky to have the assistance of Mr. Wendell Coppin ICC Coach for the Americas, who was their School Cricket Professional from 1995 to 2002.

A group of former players – several with first class experience – came together to form Datchworth RFC in 1969. They added a handful of players who had played rugby at school at “persuaded” villagers with an Association Football background to change codes. A XV emerged. Nick King, the prime mover, became the first Captain and Tottenham Old Grammarians the first opponents.

So far for 2012, the BRFU has hosted teams from South Wales Police, Curaçao, Guyana, Trinidad, St. Vincent, Yale University and Columbia University. This bodes well for the sport, as well as for sports tourism in Barbados.