Mexico may be famous for jalapeño peppers, Carlos Slim, sombreros and Pancho Villa but what the world should know is how there are a growing number of Mexicans who now think many times before becoming a blogger or journalist, in what is not a hotspot or a nuclear volcano but a deathtrap so potent that many Mexican newspapers just refuse to cover crime – as it is too high a price for most reporters…

Delegates are in Trinidad from all over the world – Samoa, Azerbaijan, Africa and Asia

This was part of a stark and raw review of deaths in journalism worldwide covered in a special report delivered by Alison Bethel McKenzie, the Executive Director of the International Press Institute at the official opening of the IPI’s “Media In a Challenging World: A 360 Degree Perspective” which was presented at the Hyatt Regency in Port Of Spain, Trinidad.

The Bajan Reporter is in the Twin Island Republic for the next few days covering and learning from those who have been in the trenches before, as a result, many videos and items will emerge from this awesome workshop for those who look for the real events behind stories which affect sons, daughters, brothers, sisters, uncles, aunts, lovers, spouses and other families across the planet. 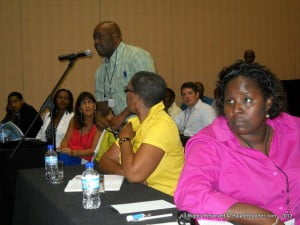 In a special presentation on how to cover Corruption, a member from Tobago is at the mic while another representative from Barbados, Ms Jewel Forde studies the question posed as a journalist from Antigua also listens closely

Although the workshop really started since the 23rd, the actual debut was Sunday and many dignitaries were on hand for the official ceremony to launch the gathering. Including His Excellency Philip Kentwell, the Australian High Commissioner for Trinidad & the Eastern Caribbean, while the compere for the event was former Miss Universe, Wendy Fitzwilliam. The Opening Address was presented by the Twin Island Republic’s President, George Maxwell Richards, who exhorted those present to seek immunity for media practitioners in much the same way the Red  Cross technicians are granted immunity from conflict or weapons…

H.E. Philip Kentwell (5th from Left), who visits Barbados from time to time was in the front row with other dignitaries 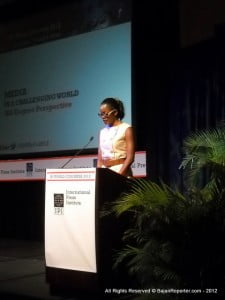 Wendy Fitzwilliam is already very statuesque, so I was surprised to learn she attended in stilettos for the launch at the Hyatt, this would put her on par with Shaq or Big Show

Another leader also part of the Introduction for the IPI conclave was not so clandestine in her outrage. Dawn Thomas, the Group CEO of One Caribbean Media (OCM), rebuked officers for assuming what would please Government Officials by impinging on the rights of those entrusted to keep the public informed. The same populace who vote MP’s into Parliament in the first place. 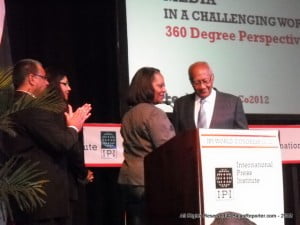 When the IPI’s Executive Director relayed her concerns in projections for what’s left of 2012, the emotions almost took her over… She compared 2009 where there were 110 deaths an 2011 had 72 deaths of the fourth estate, while Syria had the most incidents and many of the most violent murders. 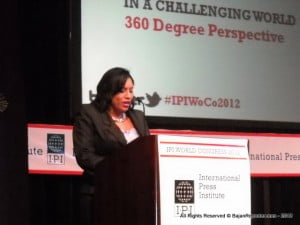 Although the situation where TT Police seized computers and hard drives from Newsday reporters, the OCM’s Group CEO immediately realised what can happen with one, can happen to ALL!

It was while explaining the fatalities of Mexico which shook Ms McKenzie the most, visibly dabbing at her eyes then smouldering with rage at how many Mexican news agencies have decided it’s safer to ignore the coverage of Crime rather than try and assist Police in stamping it out.

The conference has many expert instructors of a high calibre including Jim Clancy of CNN and Dave Kaplan of the Global Center for Investigative Journalism and concludes Tuesday, but Bajan Reporter will be delivering findings from this important seminar over the next few days, so keep your cursors hovered for more soon…