Mr Farrell noted that the equipment would enhance the Immigration Department’s ability to detect fraudulent passports and that it would prove very useful at the airport. 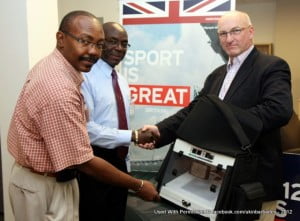 Mr Culligan stressed the importance of countries being able to secure their borders from illegal travellers, particularly in this summer of the London 2012 Olympic Games, which will see great numbers of people arriving in the UK. The importance of ensuring that only legitimate travellers were able to access the country was paramount during a time of heightened security considerations.

The equipment is fully portable and light weight, and allows Immigration officers to view security features with UV light.