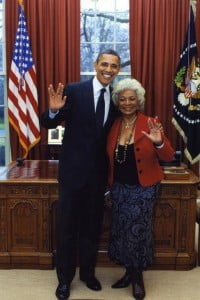 But seriously, this is based on a photo which was taken of the President in the Oval Office with Star Trek actress Nichelle Nichols this past February as part of Black History Month. The President told Nicholds/Uhura that he had a crush on her when he was a kid. Then the two of them posed for a photo with each of them displaying the Vulcan greeting with their hands.

Sure you know that U.S. President Obama is only interested in destroying all religions and turning America into a secular state, but did you know that he’s also involved in a secret cult?