Oak Hammock Marsh Interpretive Centre (OHMIC) will unveil its new Neotropical Migratory Bird exhibit on Sunday, March 25 at 1:30 p.m. The exhibit re-creates the sights and sounds of a tropical mangrove wetland. It features a rare collection of 22 life-size bird carvings by the Skeete family of carvers that was donated by the Graeme Hall Nature Sanctuary in Barbados.

This unique collection, the largest know group of its kind in the world, is ideally-suited to the new exhibit that shows familiar migratory birds from Canada sharing an exotic mangrove wetland with resident Caribbean birds. Visitors will be invited to follow Wally, the Yellow Warbler, on his annual migration from Oak Hammock Marsh to the south. Arriving at Wally’s destination, visitors will use a viewing blind, binoculars, and interpretive signs to search for Wally among the mangroves that he shares with a variety of herons, egrets, and other resident Caribbean birds.

“The Interpretive Centre was thrilled to receive the generous donation of these exquisite and unique carvings” said Michele Kading – the Head of Interpretation at OHMIC. “We were overwhelmed when Peter Allard and the Allard Family agreed to sponsor the creation of an exhibit that would not only showcase the beauty of these carvings but would enhance the Centre’s programs for public visitors as well as school groups.” The new exhibit will help visitors to Oak Hammock Marsh realize the critical importance of Caribbean wetlands in the conservation of Neotropical birds.

Carved by Geoff Skeete and his son John Skeete, each of the 22 carvings is a life-sized replica of a bird living in the Caribbean that can be seen on the island of Barbados. Geoff Skeete, the elder artist, has had a keen interest in migratory shorebirds of North America that visit the island of Barbados annually in large numbers. Geoff’s wife Joan, who encouraged Geoff to get into this art form, paints each of her husband’s carvings with the colours and details of the living birds they represent. Geoff has a Bachelor of Science Degree from McGill University in Montreal, Canada. John Skeete, son of Geoff and Joan, is also a prolific artist living in Vancouver, Canada. John is a graduate of Reading University in England, with a B.Sc. in Horticulture, and a M.Sc. in Plant Protection. His wife Monica, who is a Barbadian raised in Toronto, puts her talent for painting to good use on John’s carvings. 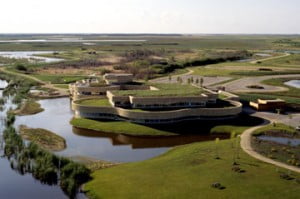 The new exhibit complements the Interpretive Centre’s mission to support wetland conservation through education. The Centre has led wetland education workshops for teachers and tourism professionals in the Caribbean region since 1997 – as a first step toward wetland conservation. Mangrove swamps are disappearing at an alarming rate across the region. As these wetlands decline, so do the numbers of resident and migrant birds. Migrating birds ignore international borders. They need healthy and abundant wetlands in every country along their paths. Their future depends on international conservation.

“Many of our visitors are like migratory birds” says Kading, “they spend time in the Caribbean – especially during the winter months. After seeing the new exhibit with these superb carvings, we hope that they will have a chance to experience unique wetlands like the Graeme Hall wetland in Barbados, and that they will actively support wetland conservation both at home and abroad.”