The book fair invited Sekou to the presentation of the new poetry anthology, according to Alberto Fuentes, international relations VP, Institute of the Cuban Book.

The St. Martin author recited at the February 12 launch in the Nuestra América hall of the Morro Castle park complex, the main book fair venue overlooking the Havana bay. This is the first time that a major publisher has published an entire volume by Sekou.

On February 13, Sekou read his poetry at the Caribbean Forum hosted by the prestigious Casa de las Americas in its Che Guevara Hall.

Sekou recited selected poems in English and Rodriguez read the translation in Musa desnuda to guests from Cuba, throughout the Caribbean, Latin America, USA, and Canada. Among the poems recited were “Carnival Village night,” “Where we live,” “the perfect black,” and “for akeem.” 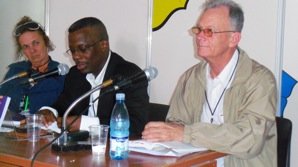 Sekou (C) prepares to read one of his poems at the launch of Musa desnuda at the Havana Book Fair while an Arte y Literatura editor (L) and Emilio Jorge Rodríguez (R) look on. (Saltwater Collection)

Rodriguez compiled Musa desnuda at the request of Arte y Literatura after the publisher saw Corazón de pelícano / Pelican Heart, a bilingual poetry anthology by Sekou that was edited by Rodríguez and published by HNP in 2010.

The 248-page Musa desnuda is among some 25 books launched by the publisher at this year’s book fair, along with titles by Ernest Pepin, Hazel Robinson, Abdul H. Sadoun, Olive Senior, Javier Egea, Marcel Proust, and Rodriguez.

Dalia del Toro, president of the Cuba Chamber of Books, stated that the 21st edition of the book fair honored “Caribbean cultures, … which encompass the fourteen island States, Mexico, the six Central American countries, the four South American countries with Caribbean coasts, plus the territories that are still subjects of European governments. The US state of Louisiana … due to the similar nature of its links with the Caribbean region” was also included.

“The festival consists of book vendors, poetry readings, children’s activities, art exhibitions, and concerts in the evenings. It is considered Cuba’s premier cultural event, as well as the event with the highest attendance in Havana.” (wikipedia.org) 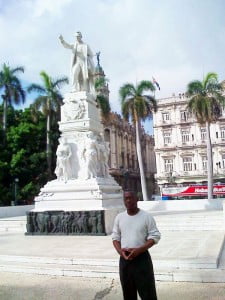 While the fair closed in Havana on Sunday, it continues to tour the country until March 4, and rallies to a finale in the eastern city of Santiago de Cuba.

Cuban Book Institute president Zuleica Romay had Lasana Sekou listed among the 69 authors from 21 countries and territories invited to meet with former Cuban president Fidel Castro on February 10 (www.cubadebate.cu). But the Caribbean author arrived in Havana late at night on February 10 and was unable to attend the meeting. According to Reuters, the “former Cuban leader Fidel Castro held a nine-hour session with writers and intellectuals” as “part of Havana’s annual international book fair.”