Head Concussion artiste Chan Dizzy and I-Octane this week wrapped filming of their collaboration for Til Kingdom Come which was released in mid January.

Produced by hot Dancehall producer, Tarik Johnston aka Russian of Head Concussion Records, Til Kingdom Come blends the styles of Chan Dizzy and I-Octane effectively and according to Video Director Duane ‘Biggz Di Boss’ Gordon who flew down from Miami for the shoot: “It was pretty good working with both artistes. I like the song, I feel it has high energy and has a good vibe all around. What’s also good about the song is that it reflects real life situations which have to some extent affected both artistes in different ways and the video mirrors those experiences”.

Chan Dizzy who burst on to the mainstream with Nuh Strange Face in 2010, stepped it up a notch in 2011 with Hello Badmind, Dat Mi Know and Our Place. He has been consistent on the national airwaves as well as regionally with these infectious dancehall singles.

The artiste who is currently aligned to the Russian’s Head Concussion label says for 2012 Til Kingdom Come is the first step in what will be a good year: “This to me is a great start to the new year. The song has been getting good airplay and is very popular in the streets. I believe that the video compliments the track and will add value to the lyrics by giving fans a visual of what is been said. A lot of people identify with the song and I think that’s the reason it’s so popular.” 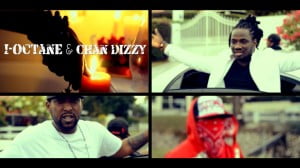 The artiste who had a very successful 2011 says he has more in store for dancehall fans as he continues to release good material: “I did a track recently called Anywhere Mi Wah on the Team No Sleep riddim for ZJ Chrome, Herbalist for Russian in the High Times riddim as well as Kibba Dem Mouth for Bigimani (Big A). We also plan to shoot the videos for the three songs next week. The year looks really bright as I am putting in the work to ensure that 2012 is better than 2011 which was a good year for me.”

Chan Dizzy also has to his credit the successful release of his Dizzyness mixtape last year and used that platform to travel internationally for stage shows in Canada, the US, the Caribbean and Europe.

The artiste is very excited about the release of his new video and says fans can expect at least two more videos from him before the end of the month.