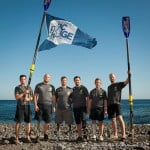 The team made a commitment to enter this challenge with the aim to raise 1 million pounds for charity. Money raised will be distributed between three key military charities: Help for Heroes, the Soldiers, Sailors, Airmen and Families Association (SSAFA) and ABF – The Soldiers’ Charity.

“Row2Recovery” – The Barbados Entrepreneurship Foundation will have “The Atlantic Crossing” as the theme for its first monthly forum for 2012, to be held at The Plantation Garden Theatre on Tuesday January 31st from 6-8pm.

The Atlantic Crossing started at the end of 2011, where ex-captains Ed Janvrin and Alex Mackenzie and four injured servicemen embarked on a historic and unbelievable 3,000 mile voyage across the Atlantic Ocean in a rowing boat. This extraordinary endeavor shines a spotlight on the phenomenal achievements of people who have physical challenges, and confronts misconceptions about what life is like for an injured solider and their family. It also aims to inspire others with life-altering injuries to realise their potential.

The Row2Recovery team comprises six UK ex-military personnel, all of which served in active duty in the Iraq and Afghanistan wars. Co-founders Alex Mackenzie and Ed Janvrin fortunately escaped physical injuries. However, their fellow crew members Will Dixon, Neil Heritage, Rory Mackenzie and Carl Anstey all suffered significant injuries which resulted in amputations. 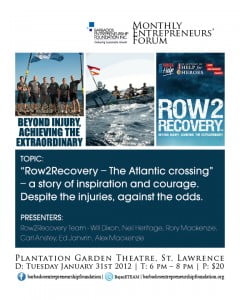 {CLICK FOR BIGGER} “The Atlantic Crossing” is the BEF's theme for its first monthly seminar for 2012, to be held at The Plantation Garden Theatre on Tuesday January 31st from 6-8pm.

The Foundation is confident that the presentation will be an inspirational experience for all patrons. There will also be a chance for question and answers at the end of the night. In fact, it is hoped that entrepreneurs can draw not just inspiration but the passion and focus to achieve a specific goal as these war soldiers have. Challenges are a given in business and in life. However, using those challenges to achieve a focussed goal is what creates extraordinary experiences.