Haiti’s Minister of the Interior Thierry Mayard-Paul accompanied by Prime Minister Garry Conille at a meeting with Ambassador Albert Ramdin, Assistant Secretary General for the Organization of American States, discussed potential cooperation in the areas of civil registry, security and disaster relief.

Topics addressed included a potential contribution from the OAS to strengthen security and disaster relief capacity building, as well as preparedness. 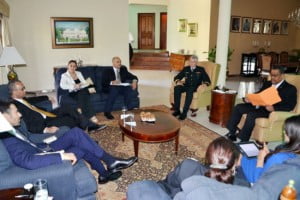 “We had a very productive meeting and are encouraged by the OAS’ intent to support and contribute to the reinforcement of our institutional capacity, particularly in areas that the Ministry has outlined in its strategic action plan,” said Minister Mayard-Paul.

He added – “Our goal is to strengthen our institutional capabilities across the country, as a key element within our decentralization strategy.”

The delegations agreed to meet again in February to discuss specifics.