Harlequin Developments have now completed foundations and substructure of the Show Village, and plan to have the construction finished in March 2012.

Commenting on the developments, Harlequin Hotels & Resorts Chairman, Dave Ames said, “It is fantastic to have both sites moving ahead quickly now. We are very committed to continued significant investment in Barbados and we are grateful that the interim concessions were finally approved by the Hon. Minister Sinckler and his team at the Department of Finance. This has allowed us to immediately resume works and will result in the creation of up to 200 construction jobs between both projects. Although Harlequin Developments have resumed work on both projects, we are still awaiting approval of the concessions package under the TDA for the luxury boutique hotel H Barbados.” 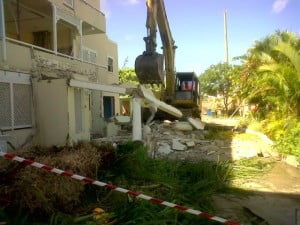 Work Resumes on the H, the former Allamanda

Garrett Ronan, Harlequin Hotels and Resorts Vice President of Hotel and Resort Development, commented, “We are working closely with the Ministry of Tourism and the Ministry of Finance to expedite these concessions and we are hopeful they can be issued this week. This would help us get H Barbados back on schedule for completion in November 2012, despite the recent delays. We are very appreciative of the recent approval granted by the Hon. Christopher Sinckler and his team, which has allowed us to move swiftly with The Merricks Resort Show Village. As a gesture of good faith, we also resumed work on H Barbados, but we do urgently need approval on the standard concessions to keep things moving there.”

Harlequin continues to show growing commitment to Barbados and the community, evidence of which can be seen from the recent success of the first Harlequin Hotels & Resorts and Liverpool FC Football Camp, which was held with the support of the St. Philip South Foundation for Education (SPSFE) in St. Phillip earlier this month.

All seven of St. Philip’s primary schools participated, with approximately six to seven pupils from each taking part. The coaching was provided by two Liverpool qualified coaches, who were flown over from the Liverpool Football academy at Harlequin Hotels & Resorts’ Buccament Bay Resort in St Vincent & The Grenadines.

Speaking about the event, David Campion, Development Director for Harlequin Developments, said, “The feedback from the students and parents was fantastic. It was inspiring to see the raw passion these children showed for the game and the genuine thrill they got from receiving such world class coaching from Liverpool Football Club. We are continuing to work with SPSFE and hope to make this an ongoing event.”