David Ellis and myself have known each other a long time, some view us Moriarty and Holmes (considering Robert Downey Jr and myself have the same year of Birth, then I do not mind the analogy as one having Jude Law as a Second is cool)… He seems propelled to show over the years he somehow has the upper hand like the fictional nemesis of the detective? I always have to remind him how the response is a resounding – NO!

I recall when he was rumoured to go to CBC as their Managing Editor but this was kiboshed, according to some, by promises of shares and a raise? Then when the sad debacle of him and Noel Lynch (who later was at the receiving end of his own petard) resulted in Ellis’ own hiatus from Moderation on Radio for months then allowed to return only at first as an evening Presenter was disgusting – however, Barbados’ laws of Slander are ancient and archaic, if a Business can prove it’s being hurt then even when questioneers may have solid evidence. they have to back down if told by courts… 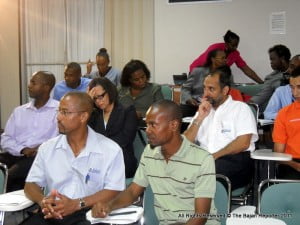 This happened with VOB and CBC with Mrs Ram over a song both networks carried in the late 80’s, they felt the singers were not mad and it went all the way to the CCJ who upheld Mrs Ram, and justified ancient laws that favour the Plantocracy and not field hands!

It is this similar reasoning which forced me to remove true items and documentation about Ocean Park which later shut for lack of interest by Bajans possibly for discovering the very things I warned about based on a source’s material. I brought up the Lynch bit since after that costly clash, many felt he would part company with River Road and start his own thing – and many at the Pine & Starcom were willing to follow him in the hopes of real questioning finally happening, but this was one of Barbados’ many Nine Day Rumours which even I was sad to see die on the vine, as I wanted something worthwhile apart from Underground or Free Press to compare synapses with…

Even when Ellis had what turned out to be his last chat with David Thompson, there were many DEM’s or ruling party supporters who thought Ellis was tasteless in asking why was Thompson in hiatus for so long? I thought he went soft on the then 6th PM of Barbados, he should have said outright – what is the matter with you? Up Front! But Ellis is more than likely still feeling the scars from when he nearly got Lynched, so to speak?

So then Ellis and I had a debate over the value of Social Media at Hilton Barbados recently; Ellis’ take is that anyone can opine in Social Media and as such may not be correct where I see it that Social Media asks the queries the lame-stream Media are terrified to utter, and he was quite annoyed when I referred to Frank Pepper and reminded him who built the Titanic and why the Ark did not sink!

Yet, strange as it may be – there are times when a synergy can develop, like what happened earlier this week at the ICBL Training Room… The Institute of Chartered Accountants of Barbados (ICAB) held a Panel Discussion on the merits (sic) of Auditing given the vagaries of ENRON, CLICO across the region and Trade Confirmers here in Barbados about 30 years ago…

Ellis wanted to know as Barbados is a small society do Auditors look at the numbers and display them in a manner so Clients would re-hire them for future inspections? If so, have they been discovered and what happened…

ICAB President Andrew Brathwaite assured the audience that regulating Auditors is very strict, listen to if he says any punitive measures happen? {CLICK ON FOLLOWING LINK FOR FULL AUDIO};-

The Bar is quite high for Auditors when assessed, it is either Satisfactory or Unsatisfactory and if the latter should happen then their books are examined 2 or 3 years apart rather than 4 to 6. 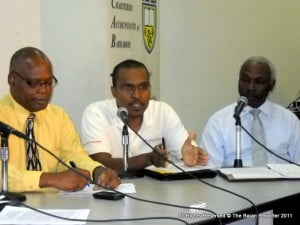 Andrew Brathwaite, ICAB Pres. {Centre} quite animated yet he did not state at any moment what are the consequencs of false Auditing nor if any Bajan was meted out such discipline? {Extreme Rt: Horace Cobham & David Ellis at Left in Ochre Shirt}}

I reminded them of Greece and its current scenario could only have been allowed to happen if Auditors were not doing their jobs – but again the ICAB President only looked at a new monitoring programme but did not appear unsympathetic to what amounts to colleagues {CLICK ON FOLLOWING LINK FOR FULL AUDIO};-

Mr Brathwaite says as their Monitoring Systems are new there are more Unsatisfactories than Satisfactory results, but again he did not state who is disciplined or how.

Ellis was obviously surprised for once I agreed with him, but I think we were both more surprised when a member fo the Audience dared to say what we suspected long ago – there is no rebuke nor is there likely to be one under the current dispensation of Justice in Barbados as it is at the moment {CLICK ON FOLLOWING LINK FOR FULL AUDIO};-

The participant, who I am sure I attended KOLIJ with, stated categorically as the room is FULL of Auditors – don’t expect a straight answer and look for many parachutes before they fall…

This was why I put the video at the beginning of the story, I see it having a bearing on much of what was discussed, it clearly can apply to Greece, AIG, ENRON or perhaps CLICO if one transferred it south of the Equator!

Another clash was within the panel itself, CEO of RBC/RBTT Horace Cobham {CLICK ON FOLLOWING LINK FOR FULL AUDIO};- wanted Auditors to deliver Reports which were punctual and yet more open, so he claims, and from the time he said so?

Lisa Padmore, former VP of the Barbados Chamber of Commerce & Industry, was ready to joust and break lances with Cobham far more than Ellis & myself or even fictional detectives and their counterparts {CLICK ON FOLLOWING LINK FOR FULL AUDIO};-

She stated why Reports can be late is due to a Bank who may have other procedures to observe before acceding to an Auditor’s examination, being this is beyond the control of an Auditor than this would create delays.

Both Ms Padmore and Mr Brathwaite stated another delay is listing too much detail in a report which may or may not get a lot of readers. The ex-BCCI Executive also reminded Mr Cobham that Auditors can only examine what is present and not make a guess for what isn’t there {CLICK ON FOLLOWING LINK FOR FULL AUDIO};-

Ms Padmore’s fiery riposte included the fact how while Auditors may be considered by some as Watchdogs, nevertheless they are not Fortune Tellers as they review only that which has already happened.

The RBC/RBTT head appeared defensive when he admitted that he sees Auditors as being Independent in a Dependent society.

Then the ICAB President towards the end of the discussion revealed how proposed modifications may include rotating Audit partners periodically so as to remove familiarity; and even so far rotating Firms – all of which are being considered as Mandatory; that like the UK there should be a Whistle-Blowers’ hotline where the Chamber of Commerce here is supposed to be viewed as the final line of Control…

However, bear in mind one thing? Look at the previous paragraph carefully… MAY, CONSIDERED, SHOULD & SUPPOSED – if those words were missing? I’d have far more respect, since it means there’s a timeline and a done deal like the foolishness about smoking that had far more concrete plans!

Wasn’t it the same late David Thompson who said Barbados is not an Enforcement society?