Everyone recalls Skitsomania when Brian Smith made Bajan comedy evolve beyond the level of Pampalam, Bajan Bus Stop and Laff it Off to the point where it could favourably be compared to In Living Colour, Mad TV or Saturday Night Live (SNL) – in fact, when Bajan Reporter {NOW LISTED IN THE YELLOW PAGES} began, among the first items we looked at was a “SHAMELESS PLUG” for the Bajan/Canadian version of SNL on DVD!

There were not many white Bajans attending the show, which is their stupid loss! The humor was non-racial but definitely mature but across the board - maybe as the weeks go by they'll open up their minds?

Unfortunately, Brian had to leave our sunny shores and things went into a kind of limbo with fits and starts, there were a few attempts from Skitso alumni Samud Ali (né Samud Whittaker) with a jam here and there like Surfer’s Café or Hilton Barbados… Then along came Nala and Dy Browne whose concept of the Gathering brought Ad Lib into a Cult status, their partnership with Plantation’s owner Tony Hoyos blossomed into a full blown Comedy Night at the South Coast hotspot last week where everyone had a chance to share their laugh-wares! Jennifer Walker, Peta Alleyne and John Walcott all had their moment to shine along with Ad Lib and Samud…

(Left: Nala; Centre: Rhy Minister & Right: Dy Browne) Guest Volunteer was Rhy Minister, who assisted the Gathering with one of their renditions of the Alphabet Improv sketch.

John Walcott showed the dangers of being a Psycho-Therapist and deciding to be cheap on your signage – many women had quite a giggle at the punchline; Dash Valley Pig Tails from Ad Lib was spruced up into a hairnet and a bow-tie for Nala as the recalcitrant cashier which earned quite a few guffaws (When Intermission happened they actually had pig tails on sale, guess what folks got? This is known as fishbowl marketing – people!) but the transition from sketch to sketch was dry, there needed to be extrapolation, much like how SNL uses a guest host each week?

The same way the entire ensemble appears at the end, I'd like to see a mix-mash up at the beginning of a next event soon at Plantation...

The second half was far smoother – Ad Lib ran their Alphabet Improv using the recent comment on demons at schools… Then Samud was the Night Watchman with his 80’s pastiche – he was funny three years ago and he’s even funnier now! He showed how Old School music was for seduction at the beginning or conclusion of an affair, how James Brown did many of his tunes via lack of Senokot, plus what Samud really wanted to happen with the Six Million Dollar Man & the Bionic Woman – LMAO! 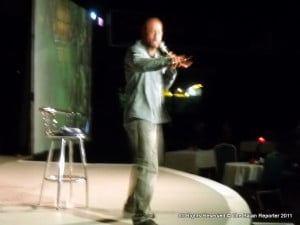 Samud’s timing and use of facial grimaces had the crowd almost screaming and was a grand top off to a debut evening of what promises to be a sweet tradition for both locals and visitors, what can be intriguing too is to have the actors try each other’s material or make a guest appearance in their colleague’s sketches?