Ian Daniel from Simpson Motors Says:- “Last night was a revelation at Harbour Lights with young Malissa Alanna displaying a maturity, stage performance and tonal range belying her tender years. Malissa’s choice of songs, including two originals, displayed beyond doubt that this young lady has arrived on the music scene in a hurry, and if last night is any indication she stands poised on the threshold of musical stardom. May God grant you your dreams!” 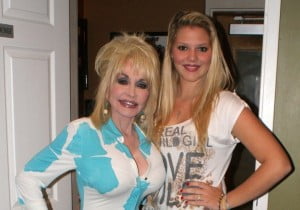 "The stunner of the night had to be the country influenced Malissa Alanna, who not only looked gorgeous, but also sounded gorgeous with a self-penned ballad that sent chills down my spine and gave me goosebumps" - Mikey Rapley of Kurama Magazine

This teen has shot so far so fast, from successes at Harbour Lights & COSCAP to searching Nashville to make her dreams come true – Malissa Alanna of Barbados is that much closer to seeing her wishes not just falling on a star but meeting them too… While in the land of Ole Opry, she met none other than the original composer of “I Will Always Love You,” “Jolene,” “Nine To Five,” among other Country classics… The one & only Dolly Parton! Who praised the crooner from the Caribbean for following her young dreams, and wishing her nothing but the best!

Dolly’s wishes may be prophetic as more than one studio is seeking to have Malissa Alanna’s crystal clear tones as part of their talent available to wow the ears of Tennessee, Atlanta and wherever else are purveyors of the down-home twang!