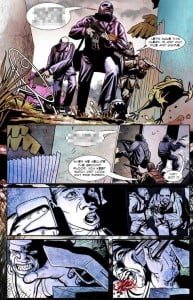 Having thoroughly enjoyed the conclusion of the fantastic Anime Kon 2011 let’s take a brief yet significant analysis of one of the successful components of the event… “ALL SHADES OF GREY” not just a local comic book, this is a Bajan version of “Blade Runner” without replicants and flying cars or origami, if Barbados really went for gambling full bore we may have ended up like this – it’s a great way to see what NOT do if this country should finally bring in Casinos to help increase foreign exchange.

Also of concern are Repatriated Deportees – envoys from temperate climes who operate here at their country’s behest say the rejected felons have little to do with crime in each island but how much of such a basic rebuff is just absconding of penal responsibility and how much is really detailed analysis?

The situations are very realistic and the way the illustrations jump at you – one can almost smell the exhaust of the minivan or the stinging fear-sweat before the robbery, as for the illumination inside a Casino, having been in a Slot Parlour or 2, I know the lighting was PERFECT! Matthew Clarke is Barbados’ next Frank Miller!

The language is raw but not overdone, it reflects a given situation and even the style of the verbal abuse reflects the cultural identity which is uniquely Barbados! Praise to Beyond Publishing for not emasculating itself with ‘frag’ or ‘spit’ for other bowdlerisations of well-known invectives, they did not use the Comics Code Of Authority stamp or any such variation, yet it was clear this comic is meant for an older reader. Nigel Lynch is easily a Caribbean Raymond Chandler for pacing and scripting hard-boiled detective fiction…

Matthew Clarke, in the background/LEFT speaking to many fans at 2 Mile Hill over the weekend

The use of ComicXpress as publisher may concern some patriots, but having asked the creators, the quality of printing when combined with the cost makes more sense in this era of globalisation. Nigel & Matthew also need to let folks know where they can get their copy, now Anime Kon is over until next year.

I look forward to the second issue since the characters are so vivid I almost feel I met them the other night while singing karaoke in Oistins or somewhere so… Big Up Beyond Publishing – may it become the Marvel/DC of the West Indies!