Has Barbadian Jewish Community been duped? CNN reveals ex-Terrorist may have been “Regular Joe,” where do the speaker fees go?

You’ll recall Barbados was exposed to lavish security when a supposedly former Palestinian terrorist came here with plainclothes & uniformed cops plus private security guarding at Two Mile Hill as a panel discussion vehemently viewed Islam compared to Judaism when the true debate was to be linked to the then death of Osama Bin Laden. 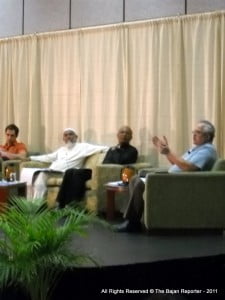 Shoebat is the one gesticulating at far right...

The moderator at the time, Peter Wickham, was disappointed no one took up how Barack Obama stated if Middle East negotiations were to begin under his bailiwick, then map lines would have to revert to 1967 either shortly before or after the Six Day War…

Barbados Free Press and myself had a vehement discussion where it got very ugly, will they look at this story which is essentially Pro-Islam by a respected entity? CNN’s Anderson Cooper has a story which Free Press will likely ignore;-

Back in his hometown of Beit Sahour, outside Bethlehem, relatives say they can’t understand how Shoebat could turn so roundly on his family and his faith.

“I have never heard anything about Walid being a mujahedeen or a terrorist,” said Daood Shoebat, who says he is Walid Shoebat’s fourth cousin. “He claims this for his own personal reasons.”

CNN’s Jerusalem bureau went to great lengths trying to verify Shoebat’s story. The Tel Aviv headquarters of Bank Leumi had no record of a firebombing at its now-demolished Bethlehem branch. Israeli police had no record of the bombing, and the prison where Shoebat says he was held “for a few weeks” for inciting anti-Israel demonstrations says it has no record of him being incarcerated there either.

Shoebat says he was never charged because he was a U.S. citizen.

“I was born by an American mother,” he said. “The other conspirators in the act ended up in jail. I ended up released.”

He said his own family has vouched for his prison time. But relatives CNN spoke to described him as a “regular kid” who left home at 18, eventually becoming a computer programmer in the United States.

Shoebat, now in his 50s, says he converted to Christianity in 1993 and began spreading the word about the dangers of Islam. He has been interviewed as a terrorism expert on several television programs, including a handful of appearances on CNN and its sister network, HLN, in 2006 and 2007.

Since al Qaeda’s 2001 attacks on New York and Washington, expertise on terrorism has been in high demand. The federal Department of Homeland Security has spent nearly $40 million on counterterrorism training since 2006. The department doesn’t keep track of how much goes to speakers, nor does it advise officials on the speakers hired by states and municipalities.

Shoebat spoke at a 2010 conference in South Dakota and was so well-received that he was invited back for the May event in Rapid City, according to state officials. He warned the police and first responders gathered in the hotel conference rooms that the Lebanese Shiite Muslim militia Hezbollah had operatives working in Mexico and that drug cartels were raising money with Islamic groups. He also asserted that federal agents could have prevented the 9/11 attacks by looking for a chafed spot, called “zabibah,” that sometimes forms on the foreheads of devout Muslims.

“You need ex-terrorists who can tell you what life is like and what thinking is like of potential terrorists,” Shoebat said. “But had we looked at the zabibah only, we would have deflected a suicide action of killing 3,000 Americans.”

But Shoebat also told the group there were 17 hijackers when there were 19. And perhaps more surprising from a man who bills himself as a terror expert, Shoebat said the Transportation Security Administration could have stopped them. The TSA wasn’t created until after the 9-11 attacks.

Peter Wickham is the one closest to the lens (in white outfit) while the Palestininian who claims to have been a Jihadist is furthest in pastel blue shirt & spectacles... Will this news be a shock to Joel Richardson, or did he have a clue there may be uncertainties over Shoebat? If so, why would Richardson be willing to overlook it? How will Barbados' Jewish community react on learning of this exposé from CNN?

So if he expresses all this concern, does Mr Shoebat do it for free?

Federal officials say they don’t know exactly how much money has gone to speakers like Shoebat. But in April, the bipartisan leaders of the Senate Homeland Security and Governmental Affairs Committee raised concerns about “vitriolic diatribes” being delivered by “self-appointed counterterrorism experts” at similar seminars.

Sen. Susan Collins, the committee’s Republican chairwoman, and Connecticut Independent Sen. Joe Lieberman asked the department to account for how much federal grant money went to state and local counterterrorism programs and what standards guided those grants. The request followed reports by the liberal Political Research Associates and the Washington Monthly that raised similar questions.

The Homeland Security Department told CNN that it has standards — and if training programs don’t meet them, “corrective action will be taken.“

Meanwhile, someone here in Barbados had to foot the bill, was it the Jewish Community? Do they get a refund, if so, HOW?